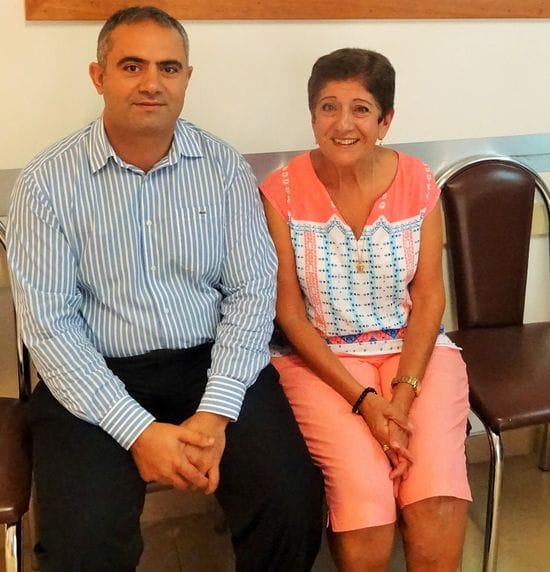 Norma Coorey and her son Thomas have an inspiring commitment to Lasallian education in Sydney, stretching back well over 30 years.

Norma is one of an elite number of Lasallian Benefactors in Sydney, an award conveyed upon her in recognition of the 30 years she has worked in administration roles at Casimir College in Marrickville.

Thomas is a former school captain of the old senior school Benilde College in Bankstown and also spent his junior secondary years at De La Salle College in Revesby.

He is now a dentist in Revesby and he and his wife Tina and their four children were selected to represent the Archdiocese of Sydney at the World Meeting of Families in the United States last year, where they had the honour of meeting Pope Francis.

Thomas attributes his strong Catholic faith to his Lasallian education.

"It had a massive impact on my life and it really helped me to engage with the Catholic community and then go on later to take an active role in my own parish at Kingsgrove", Thomas explains.

"I think that sense of belonging is critical for young people".

Thomas says the positive experience he had in Lasallian schools led him to continue his faith journey as a young adult.

He met his wife Tina at World Youth Day in Paris in 1997.

Thomas says he has many fond memories from his time at Benilde College and De La Salle Revesby and counts a number of De La Salle Brothers as mentors.

"At Benilde, I was fortunate to come under the influence of Br Garry Coyte as Principal then and he was always really concerned for the welfare of the students and at Revesby, Br Michael Johnson was Principal and he encouraged a real sense of service and community at the school", he says.

Norma has seen first hand the changing face of Lasallian education from the founding Principal of Casimir College, Br Colin Griffin in 1983 through to the leadership of a number of non Brothers, including the current Principal, Daniel McInerney.

"Now with not as many De La Salle Brothers around, it's so important to keep the Lasallian legacy alive and it's great to see Br Colin visiting Casimir and Revesby so that the students can meet the Brothers who have contributed so much to the success of the schools", Norma says.

Thomas believes one of the great strengths of Lasallian schools has been the way they have been able to reach out to many students from lower socio-economic backgrounds, giving them a sound education and leading many of them onto tertiary studies and fulfilling careers.

"The De La Salle Brothers have provided a quality education to many who could least afford it", Thomas explains.

"Education is a pathway out of poverty".

Norma says she saw many inspiring examples of that during her decades on the staff of Casimir College.

"There were so many students helped that way who came back to school reunions as lawyers, doctors and judges and many of them were from migrant backgrounds whose families had come to Australia with nothing".