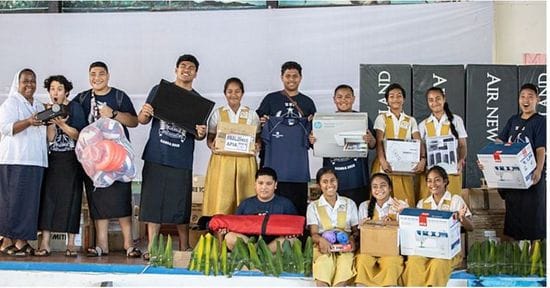 The arrival of a shipping container of donations is the first step in a new flourishing partnership between Paul VI College in Leulumoega and a group of De La Salle Colleges from New Zealand.

The Kiwi college's principal, Deamot English, said the recent trip was about bolstering the special connection between De La Salle and St. Paul VI, borne in part out of the New Zealand school's strong population of students with Samoan heritage.

The connection began last December with a Memorandum of Understanding between the Australia and New Zealand Chapter of the De La Salle Brothers, and at the invitation of Archbishop Alapati Lui Mataeliga from the Samoan Catholic Church in New Zealand.

"Really that connection is about a couple of things. It's about the De La Salle way of education and spirituality. It's also about De La Salle supporting Paul VI when they can and that's why we've got some of these resources sent over," Mr. English said.

A total of 194 boxes of resources were donated included sports and science equipment; books; assorted household and kitchen equipment for local families; sewing machines; clothing; and desktop computers.
"We've had a few days here and our boys have been working [on] activities with the students here," Mr. English said.

The visiting Principal said he had been impressed to see the school's excellent academic results and the high proportion of students going on to tertiary study.

"What we're finding is that they're doing a great job and we're just trying to bring some stuff to help them keep doing that," he said.

"I think one of the reasons that our college is very involved is that we have 550 Samoan students at our school. And so we're probably the most Samoan Boys School in the world," he said.