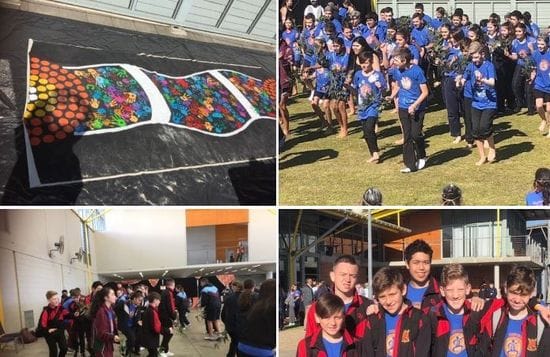 On Tuesday 13 August, six of our Aboriginal students travelled to Sydney Olympic Park with Mrs Melham and me to take part in the Sydney Catholic Schools Corroboree 2019. This was the first event of its kind, bringing together about 700 Aboriginal and Torres Strait Islander students from primary and secondary schools across the Archdiocese.

The day began with placing our handprints on the Rainbow Serpent mural. This mural is in four sections; a section will be displayed in each Regional Office and at Sydney Catholic Schools Leichhardt until the next Corroboree, where the sections will be reunited.

After a smoking ceremony and informative talks from the Uncles, we moved off to three different workshops. Our boys started with dance, where they learned some dances for the afternoon Corroboree. We then did art, where they wove headbands for themselves and a primary student to wear for the afternoon session. Finally we learned about ochre and the boys had their face painted. They were also encouraged to use the ochre on their arms and even their T-Shirts. The people running each workshop were incredibly knowledgeable and taught us a lot about culture as well as the importance of connection.

We enjoyed a much-anticipated BBQ lunch and were treated to performances from students in the CaSPA ensembles. The talent of the Aboriginal and Torres Strait Islander students in our Catholic Schools is amazing.

The highlight of the day was the Corroboree, where all students had the opportunity to participate in different dances in the dancing circle, led by the presenters. It is difficult to put into words the energy of these dances, as well as the connection they showed to the land and they people of the past and the future. I would like to thank Sydney Catholic Schools for having the vision and organising an event on such a huge scale, it really gave the students an opportunity to celebrate their cultural heritage. Thanks to all the students for getting so involved on the day and representing the school with pride and to Mrs Melham for accompanying us.