Home >  Blog >  Couple inspire not only their rural home town, but one of the most remote towns in the Kimberley

Couple inspire not only their rural home town, but one of the most remote towns in the Kimberley 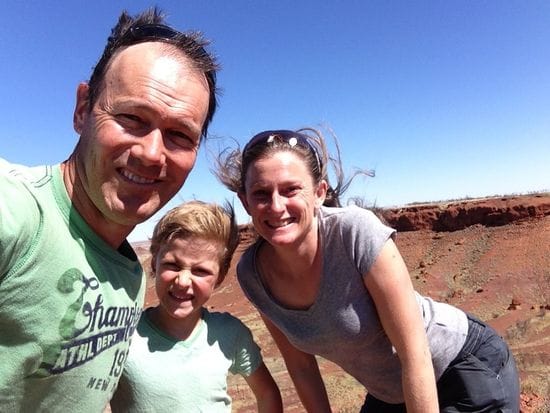 Steve and Caroline Chapman live in Armidale in rural NSW with their foster son, Patrick. The couple grew up in separate regional towns but came together in Armidale where they both studied. Today, Steve and Caroline both work at O'Connor Catholic College, the first Lasallian school to be founded in Australia. They have made an incredible mark in the community as well as their couple of visits to a remote town, Balgo Hills. We sat down with Steve and Caroline to get to know them and their incredible contribution to the Lasallian family.

Where did you grow up?

Steve: I grew up in Armidale and went to primary and high school here as well as University. I met Caroline when we were both at Uni, and then we both moved to Wagga Wagga to do my first teaching job.

Caroline: I was born in Victoria and then moved to Parkes when I was 3. I went to Parkes High School, so I didn't go to a Catholic School, and neither did Steve, but at that time, we weren't Catholic. I moved to Armidale to go to University.

How did you become part of the Lasallian Family?

Steve: After years in Wagga Wagga, I returned to Armidale because I got a job at O'Connor. Neither of us had a connection with a Catholic community until then, we weren't very spiritual at that time, but we immediately felt very welcome at O'Connor and the De La Salle tradition had a huge history about it which we learned very quickly. We found the whole community and church welcoming, so we gradually grew into becoming Catholics.

Caroline: We were going to church about once every six weeks for years really, so it wasn't a shift.

Steve: it was something that was a considerable change when Patrick came into our life, our foster son, who was five and a half when we fostered him, and it was through the Catholic church. In between coming to O'Connor and having Patrick, we visited Balgo for the first time. I had started getting involved with excursions to Sydney to volunteer to help the homeless and go to retreats.

You first visited Balgo in 2011, what was that trip for? Was that through O'Connor?

Steve: It wasn't with O'Connor but through the Lasallian Summer Camps that visited Balgo, that James Camden told us about in November 2010. We got to know James and Fr Mark because they often visited Armidale. The Lasallian Brothers weren't an active presence at O'Connor when I got there. However, the school grew in the early 2000s with Lasallian Youth Leaders and retreats, which improved our connection with the Lasallians.

Caroline: James contacted us out of the blue and asked us if we would like to join, and he showed us some videos of people that had visited, and we were super excited to go!

Steve: We were the "house parents" of the two-week trip, so we did a lot of the cooking for the group on the trip. It was quite an intense time for everyone but we really loved being able to go back there and open up a youth centre.

How did that first initial trip to Balgo affect you?

Steve: For us, we have seen Aboriginal people in Armidale but not had a great deal of contact or connection with them due to the intense history in Armidale. Going to Balgo was a completely new experience. The kids flooded towards us and were so friendly and unconditionally happy.

Caroline: Balgo gave me a sense of calmness and simplicity. The kids live in a very difficult and third world condition are also happy and its incredible.

How would you describe Balgo in three words?

Caroline: Calm, chaotic, it can be both at the same time and fun!

Steve: shallow in terms of red and dry! Definitely friendly and kids everywhere!

What made you want to revisit Balgo?

Steve: We were planning a trip around Australia in our caravan, and by now Patrick was with us, we talked to Patrick about Balgo, and he loved the idea, and because he is so resilient in terms of friends, we wanted to add Balgo to the trip. It was logistically a challenge to work out. We had a little Forrester and an on-road caravan.

Caroline: when we were at Kununnara we were checking the roads before driving towards Balgo, and a local was a bit shocked that we had a little Forrester, but it did get us to Balgo!

Steve: We always said with the group when we were in Balgo the first time that we would want to come back, so we always had it as an idea in our minds to go back.

Caroline: It was two years after we went in 2011, but this time we visited in July.

Steve: We were drawn to go back, and we wanted to share it with Patrick, and as teachers, we wanted to see when the school was going on rather than the students being on holidays.

What advice would you give to someone who is thinking of visiting Balgo?

Caroline: Go for it, don't have any preconceived ideas as to what it will be like.

Steve: Go with an open heart and prepare to get to know genuine people on a deep level.

Caroline: Don't feel 'too white' because they don't care. Steve and I volunteer with Aboriginal people here, mainly youth, and the stereotypical anger that people think Aboriginal people have, it just isn't there. They're a unique group of people. The summer camps are such a huge opportunity!

Steve: I'm the mathematic leader of learning, and we became Catholic in 2014, and we felt more closer to the Lasallian family ever since. In terms of retreats and missionary days as such, I've probably been doing less since we have become parents. But we are a more prominent part of our parish now, and I'm on the parish council too.

Caroline: I started singing in the church choir but have also started singing lessons, so I'm very active in the church choir. I was leading Catholic Women Connecting too, which is a CWL founded this younger women's group, and I led that for two years and am not at the moment. I was casual teaching, and at the moment, I've got a permanent position as a Publicity/Library Assistant at O'Connor. I like that because I can see the kids regularly. As a casual teacher, I felt very part of the school, but it's nice to see them regularly, and I like that the role is a real helping role, like staffs, students and the principal.

Do you have a role model?

Caroline: I just thought of a Nun from the Sisters of Mercy who taught me piano when I was younger. She had a bit of an influence in me becoming a Catholic because I told her a couple of years before she passed that 'we might convert one day' and she had a lot of time for a lot of people and was so caring. Her actions spoke loudly, so I try and live my life that way through volunteering and doing things for other people, it keeps me positive and happy myself.

Steve: my role model is Nelson Mandela. I am half South African and my grandparents came over from South Africa in the 1960s, so that's been a family thing about social justice and treating people somewhat. For him to stand up for that so well and successfully is inspiring.

What advice would you give to your younger self?

Caroline: Don't worry about the small stuff and about what people think.