Proud alumni have joined with current students and staff in marking a major milestone for the Lasallian mission in Sydney- the centenary of De La Salle College Ashfield.

From humble origins with just three classrooms in 1916, the all-boys school in Sydney's inner west has grown into a thriving secondary school with 650 students and has never lost touch with the Lasallian values upon which it was founded.

To mark this special milestone, the school community gathered for a Centenary Mass at St Mary's Cathedral with the Dean of the Western Deanery of the Archdiocese of Sydney and college alumni Fr Robert Hayes, the principal celebrant.

The strong, enduring pride many alumni feel for the school was evident from the outset of the mass with former college captains among those leading the procession into the cathedral. In his homily, Fr Robert Hayes reflected upon his own years at De La Salle Ashfield, as a graduate of the class of 1965 and his father before him, praising the De La Salle Brothers for their inspirational work in Catholic education.

Many Brothers, themselves graduates of De La Salle Ashfield played an active role in the mass. Brothers David Zande and Phillip Elwin were among the readers and leaders in the universal prayer and another college graduate, the internationally respected Lasallian academic Br Gerard Rummery delivered a memorable reflection. Br Gerard praised the courage shown by the six pioneering Irish Brothers who established De La Salle Ashfield in 1916 at the height of the First World War- a time when there was strong prejudice in Australia towards Catholics in the debate over conscription.

Br Gerard went on to praise the way the college has embraced the great cultural diversity of modern Australia with students from 45 different cultural backgrounds now on the school roll.

The principal address at the Centenary Mass was delivered by Br Peter McIntosh who led the college as Principal from 1962-1967. Br Peter has made a remarkable contribution to the school well beyond his period as Principal, having also delivered the main address at the 75th anniversary of De La Salle Ashfield.

Br Peter praised the contribution made by the Vincentian Priests in religious education at the college through the local parish at Ashfield, with many alumni from the school joining the Vincentians as well as the De La Salle Brothers.

In his address, Br Peter reflected upon the unique "Ashy Spirit" of the school summed up in the Lasallian ideal "enter to learn and leave to serve" and the College motto Esto Vir- translated from Latin as being the best man you possibly can be in life.

He said this motto lives on in the generations of graduates from the college who continue to make outstanding contributions across the political arena, the medical and legal professions and in banking and finance. The school song carries that same powerful motto in its title and the talented school choir and musicians then led the congregation in Esto Vir as the recessional hymn for the Centenary Mass.

The school community came together again that evening for a Formal Dinner held at the Waterview Function Centre in Bicentennial Park.

Proud alumni from the class of 1967 and former television presenter Mike Bailey was Master of Ceremonies for the event at a packed function centre. 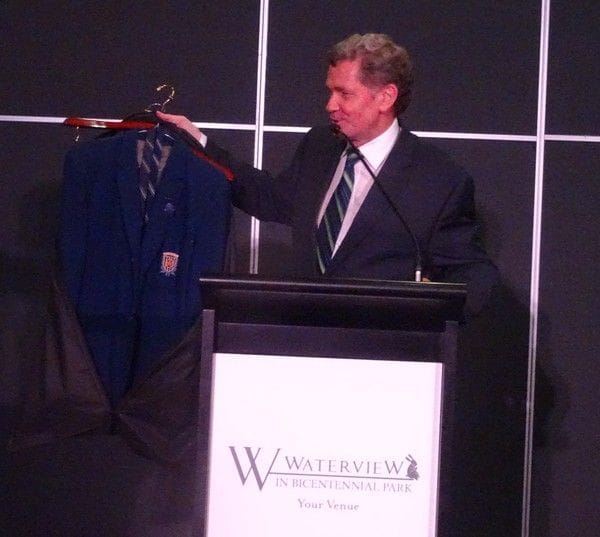 Among the guest speakers was the Executive Director of Catholic Schools for the Archdiocese of Sydney, Dr Dan White. He praised the centuries-long tradition the De La Salle Brothers have fostered in Catholic education.

"The Lasallians have consistently shown an absolute dedication to ensuring all children in their schools can reach their full potential, especially the disadvantaged and the marginalised", Dr White said.

"Tonight's dinner is not only about recognising the contribution made by current and past teachers, but it is also about looking to the future and building upon the great legacy fostered down through the generations at De La Salle Ashfield", he added.

Hundreds of former students enjoyed meeting up with their former classmates at the dinner, sharing memories and stories from their happy years at the school.

One of the alumni, Geoff Mooney read out a poem he had especially written for the occasion, "Ashy turns 100"".

A special photographic exhibition was also on display with a banner set aside for each decade of the school's history- another reminder of the talented alumni who have passed through the classrooms of the college.

Among them was Pat Drummond, the gifted singer and songwriter from the class of 1968 who performed at the dinner and gave away free copies of Skool Daze- a record he composed based on his years at De La Salle Ashfield.

NSW state MPs John Sidoti and Guy Zangari were also among the alumni at the dinner, proud of the contribution the school has played in shaping their values and career path. Alumni joined with current students and staff in cutting a Centenary Cake before a raffle was drawn with the proceeds going towards providing financial support to ensure students from disadvantaged backgrounds can access a Lasallian education.

The centenary has also been marked in a special commemorative edition of the Catholic Weekly, compiled by Masters of Ceremonies Mike Bailey

As De La Salle Ashfield now looks ahead to a new century, the Irish Brothers who established the school in 1916 would no doubt be proud of the faith and zeal which lives on in the Lasallian teachers still keeping the charism alive and vibrant there today.