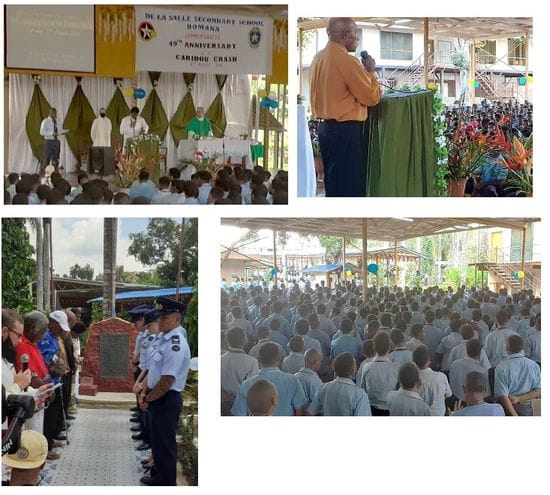 Students and Staff of De La Salle Bomana have marked the 49th anniversary of that fateful Caribou flight from Lae to Port Moresby on 28 August 1972. Aboard the plane were 3 RAAF crew, an Australian Army Captain, an Officer of Cadets and 24 PNG Army Cadets (23 from De La Salle High School and 1 from Popondetta High School). Only four cadets survived the crash in bad weather in the rugged mountains of Wau and Bulolo.

Guests at the commemoration included the two remaining survivors, Mr Joseph Fraghi and Rev Patrick Gau, as well as Fr. Giorgio Licini (secretary Catholic Bishops Conference PNG/SI), 5 members of the RAAF (including Chaplain Andrew Morris and Squadron Leader Ian Murray), and Mrs Duwang (BOG Chair). Towards the end of the Mass a simple ceremony was held at the monument site: flag raising and singing of the national anthems of Papua New Guinea and Australia, reading of the names of the deceased by Rev Gau, laying of wreaths and playing of the Last Post by a member of the Papua New Guinea Defence Force. Proceedings concluded with nicely prepared kaikai for all.

Congratulations to Br. Thomas and the Special Events Committee for overseeing the smooth running of a significant day in the long history of De La Salle Bomana!