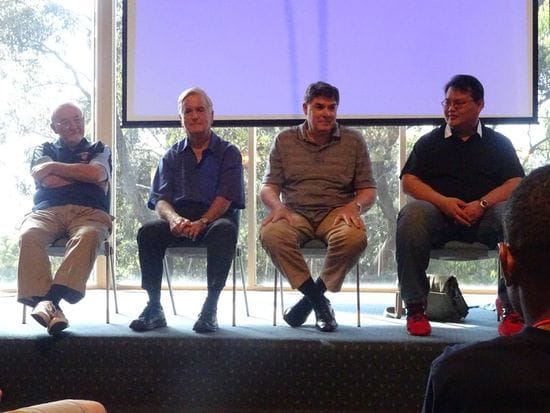 A group of four De La Salle Brothers have shared remarkable insights into their work at a seminar for over 90 senior secondary students, ranging from counselling death row inmates in Singapore through to offering comfort to AIDS patients in San Francisco.

The four day event is aimed at fostering leadership skills for senior secondary students to help them fulfil their roles as Lasallian Youth Leaders and potentially later on as Youth Ministers.

It has been a unique opportunity to bring together Lasallian students entering their final year of high school from around Australia, New Zealand and Papua New Guinea.

Br Colin Griffin spoke to the gathering about the amazingly diverse work he has undertaken as a De La Salle Brother over the past 60 years in Australia, New Zealand and Pakistan.

Br Colin shared some insights into his work as director of Lasallian schools in a predominately Muslim country like Pakistan where the schools take a highly inclusive approach to their curriculum and strongly promote the values of our Founder St John Baptist De La Salle.

Br Paul Rogers shared his incredible journey from graduating as a student at a Lasallian school in Armidale through to his leadership roles as a Principal at St Michael's College and De La Salle College Malvern and his work in seniors ministry for ageing De La Salle Brothers.

But Br Paul singled out his pastoral work with death row inmates at Changi Prison in Singapore as the most memorable part of his decades as a Lasallian.

"Within six months of working there, I knew all the inmates by name", Br Paul told the students.

"I remember arriving at the jail on a Wednesday after the inmates had simply been told 'Friday' by the guards, meaning they were to be executed that same week".

"I saw people in their rawest state and that has never left me".

Fellow Sydney-based Brother Pat McCarthy also shared some moving insights into his work as a psychologist across the United States and Europe.

He spent time as a counsellor with AIDS patients at San Francisco General Hospital, seeing many young men perish in their 20s and 30s because no cure could be found for the illness.

"I learned more from working with those patients than I had in the decades I had spent before that as a teacher and principal in Sydney", Br Pat explained.

The Melbourne-born Brother went on to play a pivotal role in the establishment of the Kids Helpline which is marking its 25th anniversary this year.

"We didn't know if we'd get even 100 phone calls, but we received 10 thousand calls on that day in Queensland alone".

"So we quickly trained up another 60 counsellors and Kids Helpline is now one of the greatest works the De La Salle Brothers have been involved in in Australia".

Philippines-born Br Mandy Dujunco, who is currently working on vocations ministry in Australia, says he didn't initially see himself becoming a De La Salle Brother during his high school years.

"My parents wanted me to work in their family business making noodles", he explained.

"But one of the Brothers at my school pointed out how that would be a boring life, focused purely on making money and that led me to consider a religious vocation".

Br Mandy has worked as a Principal in the Philippines and Myanmar and he says being a De La Salle Brother has helped him appreciate so many different cultures and ways of life that he may never have experienced had he followed a business career.