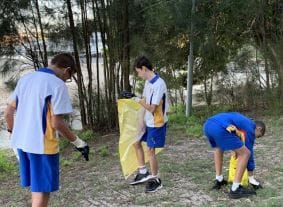 Clean up Australia day started thirty years ago by an "average Australian bloke" who had a simple idea to make a difference in his own backyard. Over the years, approximately 18.3 million Australians have donated 36 million hours, clearing over 380,000 ute loads of rubbish. Today' Clean Up Australia Day' inspires and empowers communities to clean up, fix up and conserve the environment.

A busload of young men from De La Salle Caringbah used their God-given hands to clean up the environment at Gunnamatta Park in Sydney. In 1861 Gunnamatta Park consisted of 300 acres and was reserved for 'Military Uses'; since then, the land has been subdivided, and 14 areas are now available for public use.

Zach O'Hara, Social Justice Leader at De La Salle Caringbah, stated, "We at De La Salle aim to reach out and help the community we live in as often as we can. 'Clean up Australia Day' was a great way to do so."

The De La boys also participated in a 'Graffiti Removal Day', celebrated on 28 March 2021. Graffiti vandalism costs the NSW Government and residents more than $300 million every year. The aim of Graffiti Removal Day is to highlight the problem of graffiti across NSW and encourage people to volunteer their time to remove and prevent graffiti. Since Graffiti Removal Day was established in 2012, volunteers have removed 141,000sqm of graffiti, saving the community approximately $10.40 million.

Angela Porra, Leader of Religious Education at De La Salle Caringbah, said, "Coming together as a Lasallian family and spending time together assisted not only the environment but also our growth as individuals. I was thankful to attend and give back and pay gratitude to the land I live on. During Lent this year, we as a college have been challenged to return the favours our world does for us, in non-materialistic ways, give alms, not just money. I ask you - what can you do?'"