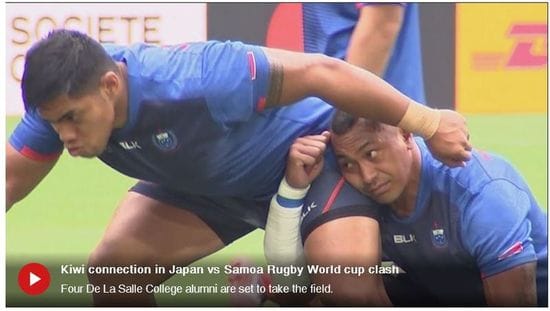 The Rugby World Cup was booming in Japan in early October, with a very special connection between Japan and New Zealand. Both teams have De La Salle College alumni, and while they were brothers in their high school journey, they've now become rivals on the field.

De La Salle Rugby is a strong part of the community in many De La Salle Schools but is certainly thriving in New Zealand. Coach Nigel Hurst says "it's a major part of our culture, but it's not all of our culture. They are evidence that you can make it no matter what you're background or where you're from".

Two players from Japan and two players from New Zealand used to play in the first 15's back when they were students at De La Salle College. They hit the world stage in Football fame this year playing against each other but made their own T-shirt's and caught up after the football match for a photo for their coach.