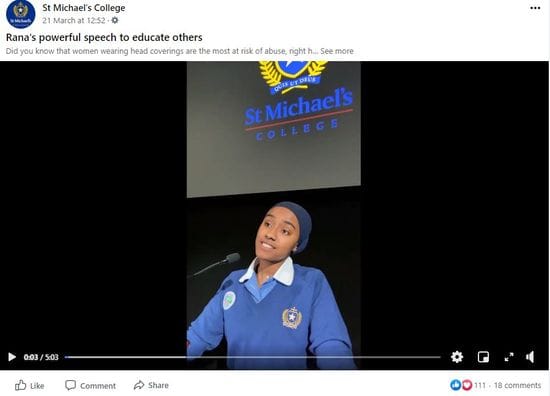 Did you know that women wearing head coverings are the most at risk of abuse, right here in Australia (reported by the ABC from a major study of Islamophobia conducted by Charles Sturt University, July 2017). To coincide with Harmony Week, we are sharing a powerful speech by Year 11 student from St Michael's College Adelaide, Rana, to educate others through her story.

Harmony Week is about inclusiveness, respect and belonging for all Australians, regardless of cultural or linguistic background, united by a set of core Australian values.

An excerpt from the speech delivered by Rana Hussein (11PC-06)

It seemed like any ordinary day when I woke up on the 9 January 2021; I was on the bus heading to work. As I looked out the window a man sitting towards the front of the bus started shouting out of nowhere. 'You don't deserve to be here. You are a terrorist. Australia doesn't want you here'. I didn't know who he was talking about and kept looking out the window. The bus was full and as we pulled up at another stop a lady got on. The seat next to me was the only empty one and as she sat down next to me the man shouted again. 'She is a terrorist. Don't sit there. It's for your own benefit. She is going to bomb youyou don't know what she is hiding'. It was at that moment to my shock that I realised he was talking about me.

After leaving my homeland of Eritrea, I arrived in Australia when I was 10 years old. As I settled into my new life in and was invited to birthday parties and other celebrations, I quickly learned the extreme beauty associated with wrapping. Did you know that the most beautiful things are wrapped? I had never thought about it until I came to Australia from Eritrea and I saw all the Christmas hype Think about it, gifts were never given to others wrapped in newspaper, they are always beautifully presented with bows and ribbons and brightly coloured wrapping. And that's how I think of my headscarf, not as a sign to people like the man on the bus that I'm a terrorist, but a beautiful wrapping for the gift of who I am as a person.

And so, I've started my own organisation, called Wrap It which aims to remove the stigma associated with head wraps in Western cultures so that we can all see our similarities rather than our differences, because this is what creates a greater humanity.

The man on the bus saw only my head scarfhe didn't see the beautiful gift that lay under the wrapping. I have come to realise that I must become the difference. And I am going to tell you why! The wrapping of gifts is the most exquisite example of the feminine. Take Grace Kelly for example, or Audrey Hepburn, Queen Elizabeth, Marilyn Monroe, Rihanna and Mary the Mother of Jesus. They all wore a head scarf in their lifetimes.

Shockingly the ABC has reported on a major study of Islamophobia from Charles Sturt University which found that women wearing head coverings are the most at risk of abuse. In fact, nearly 72% of abuse victims were all wearing a head scarf or hijab at the time of their attack (ABC news). You are probably thinking that was in America or United Kingdom but no it was right here, it was right now, and it was on your door step. Here in Australia.

I'm sure the man on the bus, the people in the supermarkets and the students in our schools all love to receive beautifully wrapped birthday and Christmas presents, so let's work together to educate them to see women's head scarves as a sign of beauty rather than threat. Hopefully we can look forward to the day when all Australians see Muslim women as women not terrorists.

And remember, just as the sun doesn't lose its beauty when its covered by clouds, our beauty doesn't fade when we are wrapped with a head scarf.

Because at the end of the day, we're just like you. And aren't all women beautiful?