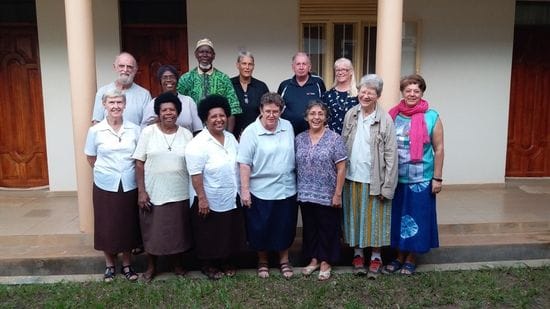 Brother Adrian Watson spent four months at the end of 2019 volunteering at the Solidarity Teacher Training College in Yambio, South Sudan. Here he reflects on some aspects of his time in the teacher training college:

Solidarity Teacher Training College is located in Yambio, a town of about 35,000 about 4 degrees north of the equator and about 40 kilometres from the border with the Democratic Republic of the Congo (DRC). The small plane from Juba to Yambio lands on a dirt runway, and passengers are hustled into a first aid tent to complete a survey form and have their temperature taken to check that there is no-one infected with Ebola, a disease that is affecting parts of the nearby DRC.The teacher training college compound is surround by thick high walls with barbed wire on top, not to keep the students and staff in, but to provide security as there has been civil unrest in the Yambio area in recent years. During my recent assignment, it was noticeable that the people were more relaxed about the security situation with many out on the streets (dirt roads with no street lights) after dark, a situation that was not so evident during previous volunteer assignments.

The staff at the teacher training college are a mixture of religious Brothers and Sisters from seven countries and eight religious congregations, as well as lay staff from three African countries. The college is headed by Sister Margaret Scott, a Mission Sister from New Zealand, and one of the volunteer staff members is Alan Drummond, an Australian from Melbourne and former long-serving teacher at St Bede's College in Mentone, Victoria. The staff are exemplary in their commitment to the education of the young men and women who spend two years acquiring a two-year primary teacher training certificate.

Solidarity Teacher Training College is currently the only functioning primary teacher training college in the whole of South Sudan. It produces about 70 graduates per year which Is grossly insufficient for a country of 11.5 million people, half of whom are aged below 15 years. Unlike Australia and New Zealand, student teachers are predominantly male because there are comparatively few females who complete the basic entry requirement of a four-year secondary school certificate. Over half of females aged 15-19 years are married in accordance with cultural and familial expectations. The student teachers spend four weeks in both their third and fourth semesters undertaking practice teaching in local primary schools. These schools can have classes ranging in size from 35 pupils to 160 pupils and have few textbooks, resources and even desks and chairs for the pupils.

Much of the food available for purchase is imported from neighbouring countries except some fruits and vegetables. Rice, lentils and beans are common ingredients at meals, and locally grown bananas are a welcome supplement. The teacher training college obtains electricity from solar panels on the roof as there is no local electricity supply. Most cooking is done over charcoal fires. Water is obtained from wells and is quite safe to drink. There are no hot water taps, so any hot water must be obtained by heating over a fire. Warm showers are found only in dreams!

The teacher training college welcomes expressions of interest from any current or former teachers who are willing and able to spend a semester (about five months now with a change of curriculum) or longer as volunteers at Yambio. Further information can be obtained from Brother Adrian at adrianwatson@delasalle.org.au.