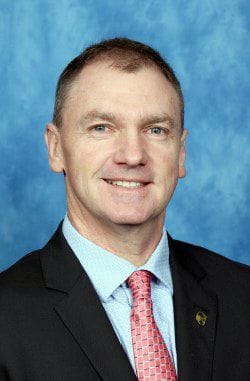 Mr Peter Buxton has been appointed as the new Principal of De la Salle College, Caringbah, from the beginning of the 2018 school year.

Peter brings a wealth of experience to his new role, having served as Assistant Principal for ten years in four Sydney Catholic schools. Peter has had broad experiences with the Marist and Patrician Charisms, but this will be his first opportunity to work in a De la Salle school. We warmly welcome Peter to the Lasallian family.

Peter's appointment follows current Principal Chris Agnew's move to Holy Spirit College, Bellambi, in the Wollongong Diocese. Chris's association with the Lasallian family, initially as schoolboy, then as teacher, Coordinator, and five years as Caringbah's Principal, has been a long and highly regarded one. His leadership at Caringbah has been very successful and respected by that community. We wish him well as he moves to his new role.

Thanks are extended to Br Colin Griffin who represented the Lasallian presence on Peter's appointment panel.
Subscribe via RSS
Tweet