Drawing inspiration from the family 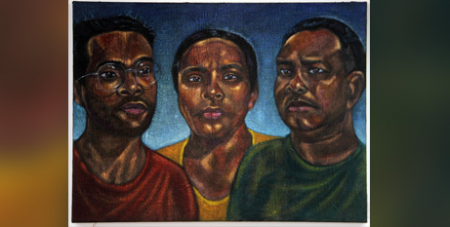 Laurah Tapas, a Year 12 student from De La Salle Cronulla, won the $2,000 prize, leading a hat trick for her school, which also produced the top art teacher and the runner-up.

Laurah, whose family migrated from Papua New Guinea in 2003, said her work, The Family, celebrated the simple pleasures of family life and the importance of family support in migrant communities.

"Like many migrant communities in Australia, the family plays an important role as a support group. This is especially true of our Papua New Guinea community which is small in numbers. It is always refreshing but also a startling contrast when we go and visit our extended family in their villages in Lae and Manus. In the village, the Church is the centre of our community life and the glue that binds us another contrast to life in secular Australia," she said.

The Monsignor Tony Doherty Award of $500 was won by Matthew Vassilieff of Marist Eastwood for his portrait of a boy playing a video game entitled Dementia, determined, distracted.

The annual Clancy Prize Exhibition is a celebration of students' creativity and spirituality, expressed through visual arts, inspired by Cardinal Edward Clancy. Each year the prize sets a theme to inspire students. This year's theme was Family love: A vocation and a path to holiness, the theme Pope Francis has set for the 2021 World Meeting of Families.