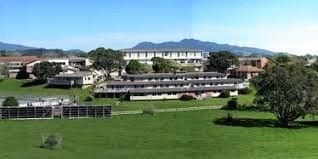 Over the last couple of years, the Taranaki College has had a major seismic upgrade. The school, opened in 1959, was sturdily built, and included a hostel capable of accommodating 100 students. (Brothers were enlisted to help build the substantial hall, carting cement.  Ed.) It was agreed between the Brothers, the Archbishop and local parishioners, that the Brothers would become the Proprietors of the College, after a number of years. Since the Taranaki region is home to historic volcanic activity and numerous earthquakes, the buildings met the then seismic standards of the day. Over the last sixty years, seismic building standards have progressively been enhanced.

The rst seismic strengthening occurred in the years following the Integration of the College into the State Education System, which happened in the early 1980's. Subsequently, a third story was added to the main classroom block. Following the Christchurch earthquake in 2011 and the Kaikoura earthquake in 2016, the New Zealand Government mandated a heightened set of seismic standards, which were geographically specic, focussing on the level of risk associated with a particular building design. The requirements placed on owners of buildings were detailed, and implementation was time specic.

In order to comply with the new building codes, the Brothers, as Proprietors of Francis Douglas Memorial College, were required within a ten-year time frame, from 2018 to strengthen all buildings in its portfolio by 2028. Fortunately, the New Zealand Government pays the Proprietor of State Integrated schools a per capita student payment, which is focussed on building maintenance. It has been from this fund that nearly four million dollars of maintenance income has been spent on bringing the College's buildings up to the new seismic standards. Three separate contracts have been let over the four years, to enable the work to be completed by October 2020.

While the structured upgrade work was being done, the opportunity was taken by the DLS Trust Board to fully modernize the interiors of the buildings, so staff and students were able to enjoy classrooms that reect modern day teaching spaces. While the total footprint of the College plant, was not altered, very signicant retrotting and renovations accompanied the project work.

ln 2021, the College now enjoys an up-to-date education facility for its 750 students.