Educators gather to celebrate and reflect on Lasallian Ministry 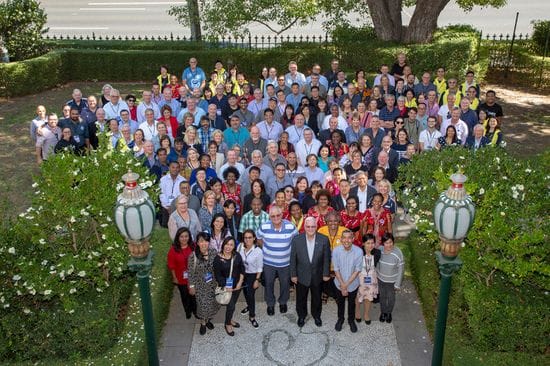 The Asia Pacific Lasallian Educators Conference (APLEC) began for the first time on Australian soil on the evening of Sunday 14th April 2019. Educators from across the District of Australia, New Zealand, Pakistan and Papua New Guinea, as well as the Asia-Pacific Region, gathered to celebrate and reflect on Lasallian Ministry in the Asia-Pacific, in the year in which the Tercentenary of the death of the Founder, St John Baptist de La Salle, is commemorated. The theme of the Conference was 'Educating for Life'.

The conference began with a smoking ceremony and a Welcome to Country, followed by an opening address by Br David Hawke, Provincial, welcoming Lasallians from across the Pacific-Asia Region, including Samoa, and the ANZPPNG District. The celebration of Palm Sunday Mass was led by Father Dean Mathieson, an Old Collegian from St Bede's College in Melbourne.

Br Armin Luistro, recently been appointed Visitor of the Lasallian East Asia District (LEAD), Sir Br Patrick Lynch and Dr Jim Watterston formed the first Keynote Panel of APLEC which addressed the realities of the contexts in which Lasallians serve around the world.

Workshops held with reference to the theme of 'Educating for Life' which was the theme for the conference, were held daily. These included workshops on: Living Lasallian in Palestine, Searching for truth, a Key to Educating for Life, How 21st Century Good Educational Practice Reflects Quality Education Principles and Growing Young Lasallians.

From Q and A's to workshops, every educator in the room was provided with a new perspective on how to educate their young Lasallians whom they come in contact with every day when they go to work. Whether it be in the classroom or on the playground, as Lasallians we were told by Br David Hawke, Provincial, "May our themes of Educating for life and One Heart, One Commitment, One Life, not just be slogans but engraved in our hearts and inspire us to action".

On the final day of the Conference, a Together for Mission program for inspiring leaders, was officially launched. Together for Mission is an extended program, in which participants will have a basis on which to reflect critically on their present work with young people, affirming what continues to be valuable and deciding on practical means of implementing desirable change in a Lasallian context.

There was also the launch of a De La Daily app a free app available for daily reflections and opportunities for prayer.

At the conclusion of APLEC, delegates joined with the students from the Lasallian Youth Gathering in a solemn, special liturgy to close four days of inspiration, learning and development.