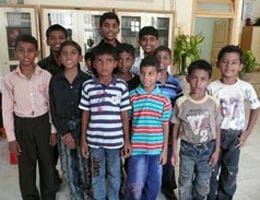 At the end of March, the De La Salle Brothers will end a long association with the Don Bosco Orphanage which has provided support to generations of disadvantaged young boys in the Pakistani city of Karachi.

Br Peter Abraham has worked at the orphanage over the past twelve years.

He has worked hard to put clear structures in place, employing staff and securing donors to ensure that the young people have the best of care and facilities.

But due to heightened security concerns in Karachi, Br Peter is leaving the city at the end of March for a new posting in Khushpur.

The Don Bosco home has provided care and a decent education to not only orphans, but also boys from poor families who cannot financially support their children.

The strong education received by the boys at the home has helped some of them access a tertiary education in Pakistan.

Around one quarter of children at the home are orphans, over one third have lost one parent with a significant number of the children having drug addicted fathers.

The Lasallian Foundation Australia has been a major donor to the orphanage with a number of schools focusing their Mission Action Day fundraising on supporting the work there over recent years.

On a visit to Pakistan in March, Brother Visitor David Hawke met with the Archbishop of Karachi, the Most Reverend Joseph Coutts who wished to pass on his deep appreciation for the work of the De La Salle Brothers in Karachi.

Archbishop Coutts is the current President of the Pakistan Catholic Bishops Conference and he shares the De La Salle Brothers' strong commitment to interfaith dialogue with the Muslim community in Pakistan.