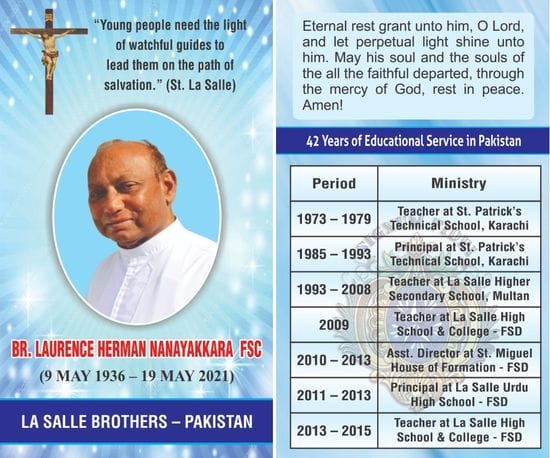 We pray for the eternal rest of Br Herman Nanaykara, who passed away on 19 May 2021. Br Herman was born in Lihiriyagama Estate, Sri Lanka, and joined the Brothers (District of Columbo) in 1954, spending 42 years in Pakistan touching the hearts and transforming the lives of so many students and teachers.

The Sector of Pakistan held a memorial service in honour of Br Herman at La Salle Higher Secondary School, Multan. Brothers and Lay partners from Lasallian Schools across the Sector were in attendance.  Br Shahzad Gill, Sector Coordinator, provided a heartfelt reflection.

Br Herman was a man of deep faith and conviction, an exemplary Religious and a faithful follower of our founder St. John Baptist de La Salle. Like Br Mutien Marie, Br Herman was a teacher of English, Religion, Mathematics and Technical studies.

Br Denis described Herman as a gentleman. "He never wanted to be a Principal or the Director of a Community. He was always ready to be of help and be of service to all."

After teaching in Lasallian schools in Sri Lanka, Herman arrived in Pakistan in 1973 and was appointed to St. Patrick's Technical School, Karachi. He was very well respected; students and teachers continue to recall his meritorious service and his amiable nature with fond memories.

In 1993 Herman was appointed to La Salle College, Multan, his favourite pasture, where he spent his golden years among the highly appreciative students and teachers. Herman had an aesthetic gift; he dedicated his life to artistically planning programs and events for students and teachers. Many teachers can vouch for how he guided, motivated and inspired them to be role models to their students.

Br Herman worked in Khushpur for a short period before moving to La Salle College, Faisalabad, in 2009, where he taught with zeal and enthusiasm. Later Herman was appointed Principal of La Salle Campus 2 (commonly known as La Salle Urdu School). While in Faisalabad, he assisted at St. Miguel House. His contribution to the formation of young people in Miguel House was quite remarkable. Many young Brothers would have a unique story of their own to share about the great impression he had made in their lives.

Br Herman was a historian and a skilful writer. He helped prepare Lasallian publications in the Sector through his excellent ability to capture the reader's interest. He also enjoyed taking strolls with his favourite dog 'Kalu'.

Br Herman returned to Sri Lanka in 2015. The Brothers in Pakistan will never forget his dedicated service to the Sector.

May our Brother Herman, who is an inspiration to us all, rest in Peace!