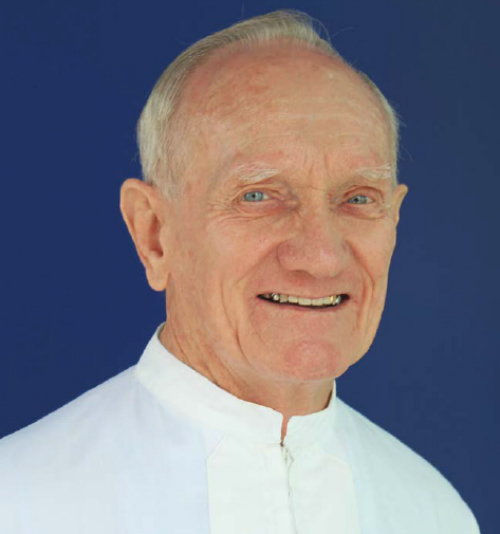 Br Michael Fitzgerald was affectionately known as "Mick Fitz " by his confreres in the  De La Salle community which was his family for more than sixty years.

As the Brothers of Foley Place gathered on the evening following his death to pay tribute to a departed brother, the words that constantly recurred highlighted his generosity and the many talents which he generously shared with his brothers, his many friends and above all his students. His religious fidelity was obvious to all and his great love for his De La Salle family was paramount in his life. He was particularly happy in his later years to share with the community the skills and expertise he had gained in the area of Technology and Design and especially so if the material furthered the Lasallian apostolate.

Michael was a Brother, teacher, catechist, artist, craftsman, cook, designer, photographer, IT specialist, gardener, mechanic and overall your typical Mr Fixit. We have lived in the same house for more than seven years and he saw to it that I did not go without a meal if the cook was on holidays.  I am sure you can see that I have been really well fed. I wonder now who will fix my computer or see that the lights work and the TV will be available, that the taps do not leak and that there are flowers in the garden.

He was only happy when he had a task to complete and especially so if it was for someone else. I really believe that in the last few months when his sickness deprived him of his ability to serve others, he was completely lost and felt that he had nothing more to contribute and hence it was time to move on. He did confide to one of the communities that he was ready to go. I felt that although he was still on his feet and was able to attend Mass with us at Marymount on his last two days in the community he was getting ready to go.

Michael was the second son in a family of six children, four boys and two girls born to Michael and Ella Fitzgerald of Dubbo. He had his early education with the Brothers in Dubbo before coming to the De La Salle Training College and gaining his Leaving Certificate in 1954. He completed his religious and teacher training at Castle Hill before commencing his teaching career.

Michael was first and foremost a De La Salle Brother and an excellent teacher who began his teaching career in 1959 when he was assigned to the community at Bankstown. He worked with the primary students and one of his students in those years was the TV presenter, Michael Bailey. He was also a successful football coach and had success every year with his teams in the Rugby League school competitions.

After eight years his proficiency in working with junior students was recognised and he was appointed to De La Salle College Armidale where he was given responsibility for the junior boarders. Michael was able to relate to the many young men who came from farming properties in the Northwest, as he had grown up on the family property outside Dubbo. He took the opportunity to visit the students and their parents on their properties and hence gain an understanding of the problems of young students living away from home and family. After four years at Armidale he was asked to return to the city and once again work with junior boarders at Oakhill College where he was to spend the next twenty-five years of his apostolate in the classroom with some breaks for further study and spiritual renewal.

His teaching had taken a turn that enabled him to focus on an artistic career and he was able to develop his artistic talents and in a larger College specialise in his chosen area of Art, Technics and Pottery. He was fortunate in being able to join Brother Tom Normoyle and Br Amedy Molloy who were working in this area in the adjacent Teachers' College. Many free hours were spent in the Pottery department of the College. Michael became a proficient Potter and this group of brothers became known for their expertise in this area, and each year displayed their work which was offered for sale to the general public.

Br Michael became quite proficient in his chosen area of Art/Technics and the Pottery department expanded in the junior secondary school. It was about this time that I asked him to assume responsibility as Head of the Junior Secondary department of the College and he accepted this role while continuing his teaching in his specialist area. When it was decided to expand the Technics area to include Woodwork, Metal Work and Design, Michael was given time to complete University studies in Design and Technology in Adelaide in 1982.
Michael returned to Oakhill College the following year where new facilities allowed for further expansion of the curriculum in his chosen area of Design and Technology.  He was responsible for helping to develop this new Department where he worked successfully with Senior students who were now able to continue studies for the Higher School Certificate. 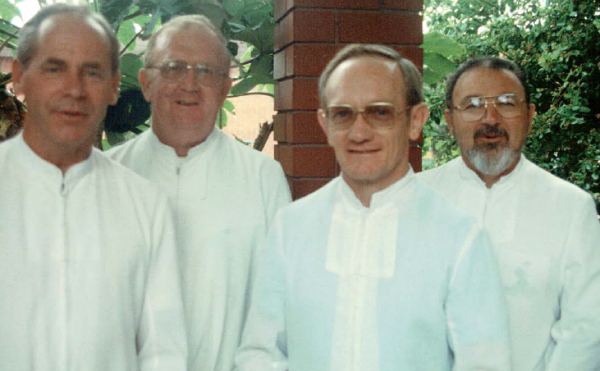 This was probably the most satisfying and fulfilling period of his teaching career where he was fully taken up with the work he loved in Technical and Applied Studies and where he also developed his skills in Computer Design. The period was interrupted when he was given sabbatical leave and travelled oversea to undertake the Renewal program at Sangre de Cristo, New Mexico. He travelled in the USA and also in Europe where he was able to visit the places of significance in the life of St John Baptist de la Salle and the Mother House in Rome.
Michael returned to his work at Oakhill until the end of 1997 when he could boast of having completed twenty- five years at Oakhill College. He was now asked to leave his classes and accept responsibility as Director of the community at the Lasallian Centre in Narooma. He continued in this role until the community closed and he moved to the San Miguel Centre at North Richmond where he could contemplate retirement.

In his retirement, he was happy to share his talents in the area of Design and he completed work for the PNG mission in the production of Award certificates and Diplomas. He worked with Br Gerard Rummery in designing the Poster on the Founder's "Twelve Virtues of the Good Teacher" which is being used in Lasallian schools both here and overseas. The logos he designed were used in a number of our Lasallian publications, and on his own business cards where he operated as "MICKFITZDESIGNS". He designed his own Christmas cards and cards for special occasions.

As a devoted educator he saw an opportunity to continue his work of teaching young people in the State Schools, and he joined the parish Catechists involved in the teaching of Special Religious Education in the parishes of Narooma, North Richmond and Castle Hill. In recent years at Castle Hill, his advice was frequently sought and he was often requested to help beginning teachers or to take extra classes if teachers were not available. Michael continued this work up until a few weeks ago when classes finished for the Term holidays.

He was a true Lasallian and touched many hearts including the students to whom he taught Religious Education in the local State schools. There is a large group of students now attending Oakhill College to whom he had taught Special Religious Education in the State schools. It was so good to see them in their numbers at the Service for Michael in the College Chapel last Wednesday. Michael enjoyed the simple things in life and won many friends through his simple interests and through his loyalty and generosity to others - his helping hand was always available to those in need. It was this noble and generous heart that finally gave up the fight last week.

The prophet tells us, " Those who are wise will shine brightly as the expanse of the heavens, and those who instruct others unto justice will shine as stars for all eternity."

I am sure that Mick's star will always shine brightly. Farewell, my friend, it has been a privilege to have walked with you.

May you now rest in peace with the Lord whom you served so well.