Exemplary Lasallian John Singh rewarded for his 45 years of service 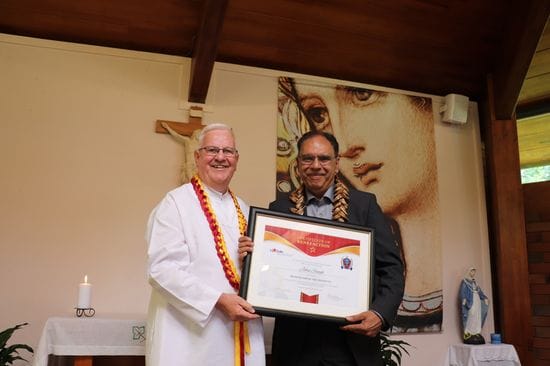 Late last year Mr John Singh became a Benefactor to the Institute of the Brothers of the Christian Schools.

John has been a member of staff at De La Salle College, Mangere East, Auckland, since 1974 and has been an exemplary Lasallian for 45 years.

He often speaks very highly of the Lasallian education philosophy and practice and is always strongly supportive of the Brothers. On several occasions, he has invited the Brothers to be guests at the Auckland Fijian Association which he and his blood brother started, some years ago.

Nothing is any trouble for John. He has been the College's timetable guru during most of his years of service and has always ensured that subjects associated with the Special Character of the school received fair treatment, given their importance to the curriculum of the school.

He has conscientiously participated in the annual National Lasallian Gatherings and benefitted from their professional development agenda with the strong Lasallian emphasis that these meetings provide for participants.

John's quiet but effective contribution at De La Salle College remains fresh, active and contemporary despite his years of service. He is a shining example of how to be an effective teacher, no matter what years of service they have contributed. He is an outstanding Lasallian.

His son Darryl gave the following tribute to his father at the Benefaction ceremony.

"Hello everyone, my name is Darryl, and I am John's youngest child.

And I'm delighted to express some feelings and thoughts from our family.

Firstly, to Br. David Hawke, Sir Br. Pat and all the De La Salle Brothers, on behalf of our family, thank you very much for recognising our Dad and organising this wonderful event.

We are so very proud to be here for Dad's Benefaction to the Institute of the Brothers of the Christian Schools.

5 years ago, we saw many of you, when the school, led by Miles Hogarty, generously hosted a celebration to mark Dad's 40 years of service to De La Salle College.

We were in awe of the thoughtfulness and generosity shown that night and today is absolutely no different.

5 years ago, and again today, we caught a glimpse of Dad through the eyes of this community and this is something, as family members, we do not ordinarily get to see.

We have been reflecting on our time with Dad at home over the years.

Why don't we all just go to the same school we wondered? Do all the students at Dad's school have black leather briefcases? Come time for homework; no one would have to prompt us. Dad would just start doing his homework, and the rest of us would silently follow suit. But why was Dad constantly doing his times tables? Why did he find them so difficult? - it was straightforward for us and why was he saying school "timetable" instead of "times tables"? We concluded that it was yet another embarrassing mispronunciation from one of our immigrant parents.

Of course, we eventually worked out that we were completely wrong, and that our father was, in fact. a teacher the polar opposite of a student. Then after 40 years at De La Salle, Dad came out and said that every day was a learning curve and that he had been more like a student than a teacher. We learnt from Dad at the moment that sometimes you can be right and still be wrong. Dad has kept our family well connected to this school. I can't count the number of email forwards Dad has sent regarding De La Salle.

He beams with pride over this college and relishes the opportunity to celebrate in the success of others.

And similarly, I can't count the number of email forwards Dad has sent our family with philosophical and spiritual messages rooted in the special character of De La Salle.

Now confession time about those emails, we don't necessarily respond to everyone Dad sends us but this lack of response is not offensive to him in the slightest. Whether we respond or not is actually irrelevant to him.

Much like his approach to everything, he is consistent as ever and simply continues on his mission to flood our email inboxes. Dad has always known that seeds have a way of growing even when ignored. One such email forward from Dad that planted itself in our minds contained the 12 Virtues of a Lasallian Leader: Gravity, Silence, Humility, Prudence, Wisdom, Patience, Reserve, Zeal, Vigilance, Piety and Generosity. I don't think I need to convince anyone here that Dad is the embodiment of these virtues but I wonder Has he always had these virtues? How much of who he is has been nurtured by the values of the Christian Brothers? How many thousands of students have had these virtues instilled in them through Dad's example? How do we, his family, find the courage to open our hearts and our minds to follow his example - a journey of life-long growth towards a greater power. Dad's Benefaction today is a great honour and a proud moment for our family. And Mum, the word is Benefaction, not to be confused with Beatification, although at times I'm sure Dad's work on the school time table did seem miraculous.

Actually, Dad has been in the good company of miracle workers. To quote from Saint John Baptist De La Salle: "To touch hearts and to inspire is the greatest miracle you can perform."

Dad, just think about how many young people you have inspired in the last 45 years I can't think of a more meaningful way to have spent your time.

You are held in the highest esteem by this wonderful community. We all continue to learn so much from you, even now. You have a wisdom that only life can bestow IF you are listening. You exemplify hard work, commitment and life-long learning.

You have evolved, reinvented yourself, supported and guided thousands, stepped up and stepped down all whilst demonstrating leadership.

But at your core, you are simply a fine teacher, a loving husband, a wonderful father and grandfather, and an instrument of God.

Thank you once again to the Christian Brothers for your support and belief in our Dad. We are all so proud of his contribution and commitment to De Le Salle College and his service to this school has enriched our family immeasurably. Thank you."