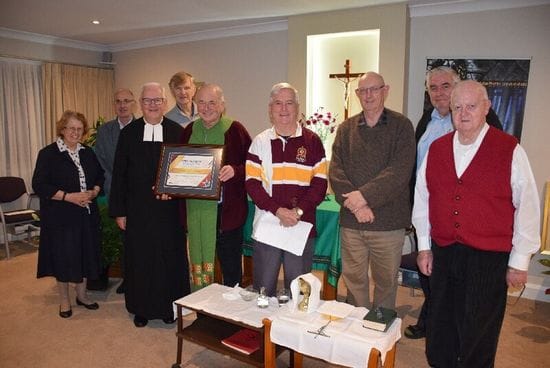 Father Kevin Walsh was granted Association to the Castle Hill Community for his long-standing relationship with the De La Salle Brothers.

Father Kevin Walsh is a former Passionist priest living privately in retirement in the diocese of Parramatta in a parish neighbouring our Castle Hill community and has been for some time on a roster of Priests who serve our community with a regular weekly Mass. Besides his regular place on the roster, he offered to fill in for any priest unable to attend.

Kevin has had a long association with the De La Salle Brothers at first meeting them when he visited his grandparents who lived next door to the Ashfield community. As a deacon he was appointed to Marrickville to await his Ordination and was invited by Brother Claude Sweeney, then Director and Principal of the College, to work in the school on a regular basis. He impressed Claude as a gifted teacher and after Ordination before leaving Marrickville Claude suggested to him that if he had the opportunity, he should undertake Teacher training.

Kevin was appointed to Hobart and took the opportunity to gain some work with the Christian Brothers at St Virgil's College in Hobart. When his Superiors suggested he attend University, he followed Br Claude's advice and trained as a teacher.

Kevin was posted to the UK for a period and found himself again close to the De La Salle brothers and took the opportunity to work with them at Highgate. On his return to Marrickville his Superior, Father Linus suggested he apply for the position of Religious Education Coordinator at Casimir College Marrickville where Brother Colin Griffin was Principal.

When Brother Pat McCarthy took up the position of Chaplain at Oakhill College in 2019, he called on Father Kevin to assist him when a death occurred in a family or when an ill parent had lost contact with the Church. Pat sees his role as pastoral in Ashfield and Oakhill and saw that Kevin could be associated with him by fulfilling a sacramental role when needed.  When he realised that there was a role he could play, Kevin asked if his position could be recognised as Associated with the Brothers in their work.

Our Institute was founded on the 'Vow of Association' taken by each De La Salle Brother. The Vatican reminds all religious to look to their original charism " Association".  Our Superiors have urged us to encourage our helpers to be associated with us in the human and Christian education of the young thus sharing with us more profoundly in the charism of St John Baptist de La Salle.

Our former Superior General, Brother Alvaro, wrote extensively for the brothers early in this century under such headings "Associated with the God of the Kingdom and the Kingdom of God" and "Associated together to seek God, follow Jesus Christ in the Work of the Kingdom ". He also set the following objectives to the newly formed Lasallian Family and Association:

We are delighted to officially recognise Father Kevin as an associate of the Castle Hill community.