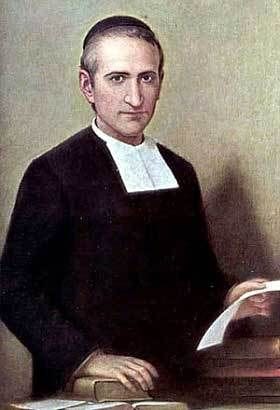 Today we celebrate the feat day of St Miguel.

In the District we have two places named in his honour; Miguel House at Faisalabad and San Miguel, a yourtown ministry at Richmond.

The Australian Catholic University has a student residence in Sydney named after him. It has an impressive mural of St Miguel in the entrance lobby.

Michael was born in Cuenca, Ecuador in 1854 to a wealthy family. From birth he had a deformity that disabled him and prevented him from walking.

One day, as he sat in his wheelchair, he saw a rose in the garden. Above the flowers, he saw a beautiful lady wearing a white and blue dress, calling his name.

His family, who could see nothing other than the rose, was astonished when he proceeded to get up and walk. From then on, Michel spoke with Our Lady and Jesus on a regular basis.

When the De La Salle Brothers arrived in Ecuador in 1863 and set up a seminary, Michael enrolled, though his parents objected to his plans to become a lay brother rather than a priest. Instead, they sent him to the seminary where his father taught, but within a few months he became seriously ill and had to return home.

His mother finally agreed to let him become a lay brother. In 1868, Michael entered the order of the De LaSalle Brothers and a year later was assigned to the Beaterio, a congregation of lay sisters dedicated to prayer and charitable work in Quito, where he specialized in preparing children for their First Communion for the next 26 years.

Transferred to Spain to assist in the translation of sacred documents, he caught a cold that developed into pneumonia, and he died on February 9, 1910. His body was returned to Ecuador, and his tomb in Quito soon became a shrine and place of pilgrimage.

The Ecuadorian government issued stamps bearing his likeness and erected a bronze and marble monument to him in Quito's central park.

Upon the statue's dedication in June, 1965, there was a huge parade in which 30,000 school children participated