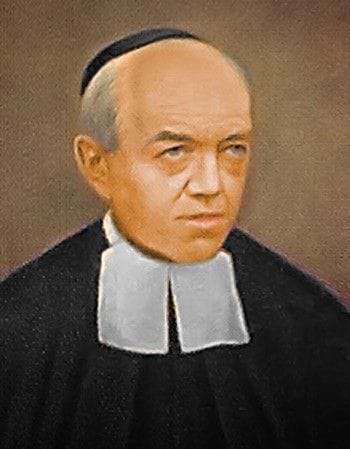 Today the Institute and the Church celebrates the feast of St Mutien-Marie, a Belgian De La Salle Brother. Throughout our Lasallian world, you will find many institutions named after this simple Brother. Closer to home, in our own District, many schools have named building or pastoral care houses after him. Below is a short reflection on the life of Br Mutien, a prayer and a short youtube clip which.

Louis-Joseph Wiaux was born in the small village of Mallet in the French-speaking part of Belgium on 20th March 1841. His father was a blacksmith; his mother kept an inn. Louis-Joseph joined the De La Salle Christian Brothers at age 15. He entered at their school in Malonne, Belgium, receiving the religious name of Brother Mutien-Marie. At Malonne he was to spend all the rest of his years.

It was taken for granted that Brother Mutien would pass his religious life in the classroom. But try as he might, Brother Mutien proved to have no gifts at all as a formal teacher. Nor did he have gifts that some of his confreres did as a writer of theological or spiritual books. Nothing he did during his life served to draw him out of the shadows and into public light. He was simply not "newsworthy". "He accomplished nothing out of the ordinary, said the Belgian bishops on the occasion of his canonization.

But if Brother Mutien was not gifted as an educator, he made a vast contribution to his students as a mentor. For he was obviously a man of deep prayer, and prayer motivated and rendered fruitful all his activities among the students.

Judged "good for nothing", Brother Mutien soon proved himself "good for everything" outside the classroom. Daily he supervised the playground, the organized walks, and the boarders' dormitories; and it was he who rang the school bell that punctuated the day's schedule. Thanks to his prayerfulness, these commonplace duties became infused with spiritual life. All who knew Brother Mutien noted the profound impression of goodness and peace that he made on everybody with whom he came into contact. Called the "Brother who is always praying", he imitated Jesus in putting himself humbly and totally at the service of his little scholastic community. He was especially attentive to the students, "hurting none and forgiving all." He encouraged each of them to live up to the full potential of the gifts God had given them. Brother Mutien died aged 75 on 30th January, 1917.

Prayer: Lord our God, may the life and witness of Brother Mutien inspire us to live more faithfully your call to walk in your presence and grow in holiness. Lead us to delight in the life you bring through all the circumstances in which you place us and with the people whom you entrust to us. Lead us to discover the simplicity of the gospel and live in appreciation and thanksgiving with Jesus your Son. We make this prayer through Christ our Lord. Amen.