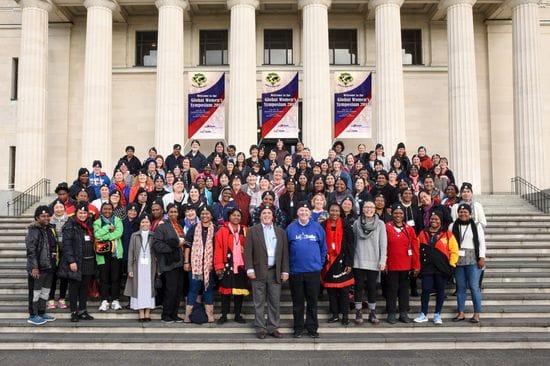 Realizing our 300-year-old Lasallian global network, originated by men for the education of boys, is now predominantly made up of women is profound. According to recent statistics, 56% of our Lasallian network is composed entirely of laywomen. Laymen make up 41%, Brothers 2%, and the remaining 1% make up individuals of other religious orders.3 More importantly, while women dominate in our ministries, they are drastically underrepresented in leadership roles throughout our Lasallian world. Acutely aware of the disproportionate representation of women leaders, Brother Superior Robert Schieler, FSC, has been actively encouraging Lasallians to find new ways to promote the advancement of women into leadership roles. During his opening remarks at the 2017 Lasallian Global Women's Symposium, in New Zealand, Brother Superior invited attendees to think about how to "create structures and opportunities that will affirm the role of young and gifted professional women . . . to our mission" and identify ways "to incorporate more women into the mission-related governmental structures at the local, District, and Institute levels for transformational leadership."4

Inspired by this need and the Buttimer Institute of Lasallian Studies' research practicum, I investigated the lived experience of seven Lasallian women among the first to rise to international leadership roles within the Institute. The purpose was to discover the experience of these pioneering women leaders so our Lasallian network could learn from their journey and advance Brother Superior's call for more Lasallian women leaders. This paper will share literature findings on today's women leadership experiences as well as the study's design, findings, discussion, and conclusion.

According to the U.S. Department of Education, women make up over 55% of all principals at private schools.5 They have consistently outnumbered male principals for over 30 years. Similarly, women make up 52% of public school principals, outnumbering their male counterparts for the past 10 years. However, fewer numbers of women leaders are present in higher education. According to the 2017 American College President Study,6 only 30% of college and university presidents represent women with the majority being at public 2-year colleges. Given the role of president is often filled by those emerging from senior faculty administrative positions, the prediction for more women presidents, globally, is grim. According to the Catalyst, senior women university faculty in Japan, India, and Europe hover around 15 to 24% with Canada and Australia ranging from 40 to 44%.

When considering the Lasallian network, the numbers decline even more. In the Lasallian Region of North America (RELAN), women represent only 8% of middle and postsecondary school presidents. Of the seven colleges, only one has a female presidenta recent hire in 2015.8 A website search of universities in the Pacific Asia Regional Conference (PARC) and the Lasallian Region of Latin America (RELAL) revealed only one female university president in each Region. Similarly, when looking at secondary schools in Australia and New Zealand there were only two female principals. At the Institute, only one of the five 2018 councils were led by a woman.