Former DLS Malvern Student: Forensic expert at the top of his game 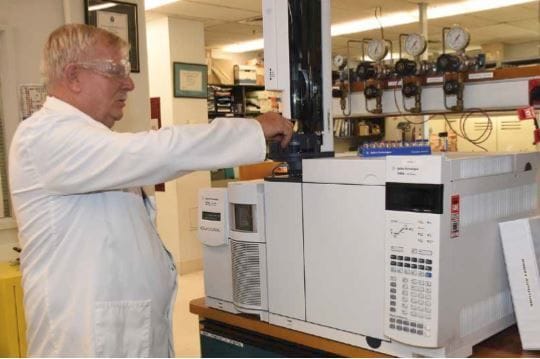 As the Head of Victoria Police's Fire and Explosion Unit, John Kelleher AM PSM (1970), has spent the last 30 years investigating the factors that lead to disasters caused by fire and explosives.

Early in his career, Kelleher was a young  forensic investigator on the Russell Street Police Headquarters bombing, regarded at the time as Melbourne's first experience of urban terrorism. Since then, Kelleher, now an international expert in his field, has investigated almost 5,000 fire and explosive incidents here and overseas, including as a forensic investigator assisting the AFP/ Indonesia National Police response to the 2002 Bali Bombings. This year Kelleher marks 30 years of service to forensic investigation for Victoria Police. He took time out of his busy schedule to talk to Roll Call.

Kelleher's forensic career started in the Explosives Branch of the Victorian Mines Department, which later came under the Worksafe Victoria umbrella. After five years learning about the making and commercial side of explosives, he moved to the Victoria Police Forensic Department where he has worked ever since.

The role of a fire and explosives investigator has its challenges often involving complex and confronting scenes and Kelleher has had his fair share, including the Russell Street Bombing, the Longford Gas Plant explosion, the Bali Bombing and the Black Saturday bushfires.

As an expert in the field, who has been published and referenced, he is often called on as an expert witness in the prosecution of incident perpetrators, some high profile.

In 2009, he was called as an expert witness at Australia's largest and longest terrorism trial of the Melbourne home-grown Muslim terrorism cell, led by self-proclaimed sheik Abdul Nacer Benbrika, and last year he testified in the case against four men accused of plotting to use homemade bombs to attack Melbourne landmarks on Christmas Day.

Kelleher's service has not gone unrecognised. In 2003 he was awarded the Public Service Medal, and in 2014 he was made a Member of the Order of Australia (AM) for his significant service to the community, as a forensic specialist in the field of fire and explosion investigation.

There is no typical job description for an explosives expert. "Each morning I look at what fire or explosion scenes need to be attended, and discuss with my team who will go where, and who will stay in the laboratory to analyse samples and write reports. For example, yesterday I flew to Mildura to investigate a house fire where two people were injured. Today I attended a bomb scene in Geelong, and collected fragments of a device to be analysed and reconstructed over the next few days."

Kelleher is quick to acknowledge that he is part of a very dedicated team of people. "I work with dedicated and talented people who help communities all around Melbourne and Victoria in difficult times."

With constant improvements to forensic technology, Kelleher says that forensic science has recently gained prominence. "I think Victoria Police, particularly in recent years have recognised and embraced areas like mine, which provide specialist support and advice."

"The Victoria Police Fire and Explosion Unit is now comparable to that of the American or British police," he says.

"Results which used to take weeks or months are now available in hours or days, so that forensic results can provide real-time information to investigators. These days Victoria Police is highly regarded nationally and internationally in this area."

Along the way Kelleher has been fortunate to have had opportunities to study overseas and, more recently, to teach in America, Thailand and Indonesia, where he was a senior lecturer in the Post Blast Analysis Course, Jakarta Centre for Law Enforcement.

As a student at De La Salle College, Kelleher excelled in maths and science. He continued on and completed a Bachelor of Applied Science (Chemistry, Physics) and Bachelor of Arts (Mathematics) at Monash University. "I was fortunate that the teachers I had at the College encouraged me to study, and gave me a foundation in the physical sciences which I have always been grateful for."

Kelleher says STEM subjects can take students in a number of directions. "The hard science subjects do not just lead to academic careers, but can lead to a wide variety of science-based occupations, such as forensic science."

To become an explosives expert one needs a unique set of skills. "Chemistry is most important and Physics is useful."  But he admits that not everybody is  suited to the work.