Home >  Blog >  Founder's Day in Melbourne - 'Together and By Association"

Founder's Day in Melbourne - 'Together and By Association"

Posted by Ria Greene, Rana Brogan and John Rhynehart on 27 May 2019 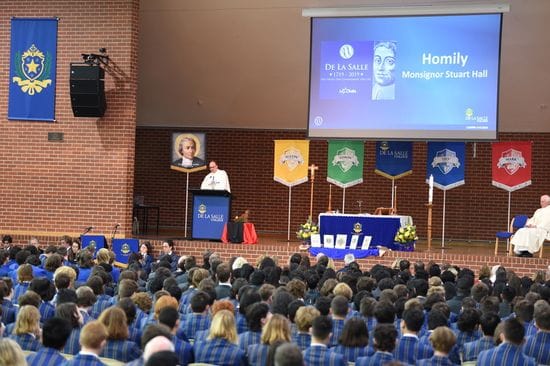 The Melbourne model for the Tercentenary celebrations of Founder's Day was epic! Involving around 4,000 students almost 450 staff and numerous buses, the four Lasallian Colleges hosted four Combined Lasallian Colleges' events, that is, simultaneously but across four different venues.

Regardless of location, the program was identical:

While the structure of the program seems straightforward, the planning and execution took great dedication and attention to detail; as host Colleges, we started our preparations over 12 months ago. The Planning Committee are grateful to the positive and practical support that was received within each College.

De La Salle Brothers attended each Mass and their presence reminded us of their life-long commitment to education, and to the legacy of which we are both beneficiaries and custodians.

In this Tercentenary Year, with all Lasallians around the world, we aimed to give 'honour and praise for the life of De La Salle'.  The following reflections, from each venue, will provide some insight to this special celebration.

It was fitting that the Brother Visitor was the guest of honour, along with nearly 1200 students in Years 5 - 8, at St John's Regional College, Dandenong, as we gathered to celebrate the Founder's tercentenary.  Fitting because we had the opportunity to hear from one who has dedicated a lifetime to De La Salle's mission and those listening, the young ones embarking on a Lasallian Journey, were all ears!  We were blessed with the liturgical leadership of Fr Andrew Jekot who opened up for us the Tercentenary Theme he gave it life as we imitated his gestures and called out the words.  We grew in happiness of the Spirit as Andrew Chinn led us on a musical mystery ride through the values of the Gospel.  A friendly game of basketball during lunchtime spoke of the manner in which the students from the Lasallian schools in Melbourne happily came to together to play, pray and, with the inspiration of the Founder, practice what they preach.  It was a joyful day.

On the 17th of May, 2019, the Year 9 students from St Bede's College travelled to St Patrick's Cathedral in the city to attend a special Mass celebrating Founder's Day. Hosted by St James College and celebrated by the Archbishop of Melbourne, Peter Comensoli, the Mass went for one hour and was a great Mass. Students from De La Salle College and St John's Regional College were also there. Following this we had lunch together in Carlton Gardens on a really beautiful, sunny day. After lunch, we walked to the Academy of Mary Immaculate, an all-girls school, to hear presentations about making everyone feel equal. During the presentations we saw how homeless people have become 'invisible' in modern society with people walking past them, even if they are a family member. We also received a talk from someone who is a part of a group called NET (National Evangelisation Team) about homelessness. Overall it was a great and interesting day to commemorate St John Baptist de La Salle, our Founder.

St Bede's College warmly welcomed visiting students and staff from De La Salle College and St John's Regional College for the Tercentenary Combined Founder's Day celebrations. On arrival, students were organised into temporary, mixed homeroom groups, then the St Bede's student hosts led some 'get to know you' activities before heading to the Sports Centre for Mass.

Over 1200 students, 100 staff and 7 Brothers assembled for Mass; the Principal celebrant was Old Collegian Father Chris Monaghan, a Passionist Priest and President of Yarra Theological Union. Fr Chris recalled, with gratitude, the education he had received from the De La Salle Brothers at St Bede's College and encouraged all of us to grow as people of Faith, Service and Community.

Following Mass, a Hot Dog lunch was served with almost military precision; over 1300 hotdogs, 1300 drinks and 1300 cakes were served in 8 minutes! This took some planning, but with 'all hands on deck' it was executed well. Students and staff remained in their temporary homeroom groups and enjoyed a picnic style lunch together; some went on to play down-ball, others played basketball, while others enjoyed the sunshine and relaxed conversations. After lunch, Fr Rob Galea shared his story of transformation and entertained us with a few songs.

There is something quite energising when you are among such a large gathering of young people and enthusiastic staff.  On this day, with three Lasallian Colleges interacting together, the phrase "We are Lasallian" had an added dimension, and as our Principal, Mr John Finn, said "I think the Founder would like to have been amongst the students."

As host school, St Bede's is still basking in the glow that comes with a community event of this scale.  May that spirit of joy, welcome and hospitality remain as we continue throughout this Tercentenary Year.

ONE HEART ONE COMMITMENT ONE LIFE #300LaSalle_1.mp4

This year we celebrated an extraordinary and special Founder's Day at De La Salle College, Malvern.

The staff and student "welcoming ambassadors" were in place awaiting the arrival of our Year 12 guests from St Bede's and St John's Colleges.

The day commenced with an uplifting celebration of Eucharist where we commemorated three hundred years since the death of a man and the legacy that has since pre-empted and inspired the entire Lasallian institute. The De La Salle College band and choir provided us with music and voices that enhanced the celebration and captivated all who were present.

Our community at De La Salle College prides itself on being a place of open arms, a place of hospitality and a place of deep affection for all, especially fellow Lasallians. It is a statement of who we are and this was certainly reflected in the hospitality shown in the shared lunch that was hosted and the live music that was performed. The sun was shining, the sky was blue, staff and students were gathered and relaxed in the courtyard listening to the live band. The sense of community was a humbling experience. It was truly a happy day! And without a doubt and felt by many, exactly what the deeper message of the Founder, St John Baptist de La Salle was about - bringing people together!