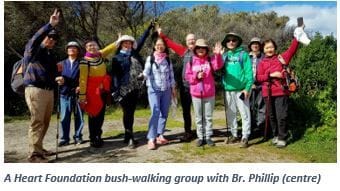 Who doesn't value freedom? Phillip Elwin, De La Salle Brother, believes that with freedom comes the responsibility to act wisely. Mature years give plenty of opportunities to live life to the full (cf. John's Gospel 10:10) - and Phillip proves it with the array of activities he is involved with, in his seventies.

A science teacher in several Lasallian schools, then involved in formation ministry in Australia and then many years in Papua New Guinea, Phillip has spent latterly some years as a carer of older Brothers. He has made much use opportunities to continue education overseas and locally.

Twenty years ago, he saw an older retired missionary Brother from Papua New Guinea days, explore what he could still offer church and the wider society. This Brother threw himself into the service of housebound and needy people through the St. Vincent de Paul Society in his local church. He was also an overnight carer /supervisor for a disabled people's house. This witness of a desire, as a retiree, to keep involved in life, has pushed Phillip to use his "life-knowledge, wisdom and talents" to do likewise, and to great effect.

Initially, he used his guitar skills to enliven social events in two local aged-care home; he tutored struggling university students through a Sydney "Mission Australia" support service, and then found a solid commitment in leading one of several bush-walking groups, linked to the Heart Foundation. With others, he co-ordinates and leads two groups. These are very often older Asian Australians, who keep healthy while taking in the glories of the natural world, the history of Sydney and Harbour foreshores. The less tangible benefits that he sees are helping others grow in a sense of "being at home" locally, becoming more connected with people and place, and "sometimes deepening their sense of God's everywhere-presence in creation".

In his local church community, he is firmly committed to a social justice group, which funds projects in a poor Timor Leste community, and is establishing some connections with the indigenous Catholic parish at La Perouse. There has also been raising supplies in-kind, in collaboration with the Jesuit Refugee Service: the Social Justice Group collects donations and distributes food to refugees in Western Sydney.

Br. Phillip perceives some older people as "shutting down (and)not searching for life". His strong motivation to keep searching for new life was also inspired, some years ago, by an elderly Brother Paschal who declined in health until his death, with motor neuron disease. Living in a nursing home, he was a cheerful presence who knew the names of residents and nursing staff, moving around in his motorized wheelchair, connecting with many people. Admired by his Brothers, while body, speech and movement gradually closed down, he was hugely open to and shared with those in his community.

We all, says Phillip, have the possibility and opportunity to be more intensely, rather than do and produce for those we care for!