From nerd to Hollywood ... 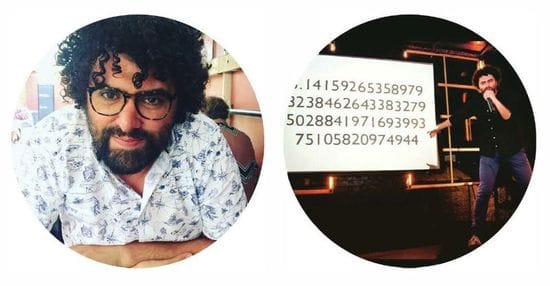 Simon works in Los Angeles for three months of the year on Discovery Channel's #1 TV show in North America - Outrageous Acts of Science. He is also the Australian Numeracy Ambassador and travels the world, performing math comedy shows to live audiences.

Simon reminisces about his time at St Michael's College  and the fantastic teachers he had who fostered his love of Science and Maths. He will never forget the time Mr Luppino explained to him and his friend Paul (now an Aeronautical Engineer for the British Aerospace) what this 'E=mc2' thing was all about.

Mr Duke was the first person to ask Simon if he wanted to be a mathematician, which came after an utterly disappointing conversation when he discovered that he didn't come up with the Pythagoras Theorem, but it was then that this idea had been put into his head ... "perhaps I could be a mathematician?" The other experience that changed the course of Simon's life came to him in the Year 12 Italian end of year play. The experience he had on stage connecting with over 500 people left Simon with a burning ambition to be a performer.

After studying pure mathematics at university and working as a statistical forecaster for Foster's Wine Estates, Simon came up with the idea to combine his love for maths and passion for performing to try something different - stand­up comedy about maths.

At his first attempt of maths comedy during the Melbourne Comedy Festival, Simon unexpectedly made it through to the national final. For the next three years, Simon worked on his comedy doing gigs and performing during the comedy festival seasons. One night people from the ABC Science came along and saw his performance, they liked what they saw and put him on their flagship science program 'Catalyst'. It went so well that he was given a huge grant to tour his show around the country.

Since then Simon has been the Australian Numeracy Ambassador for eight years and is performing all over the world including Saudi Arabia, Brussels, London, Los Angeles and Rio de Janeiro.

"Everyone needs to try as many things as possible especially when you're young. Only by giving things a go will you learn about what you're good at."