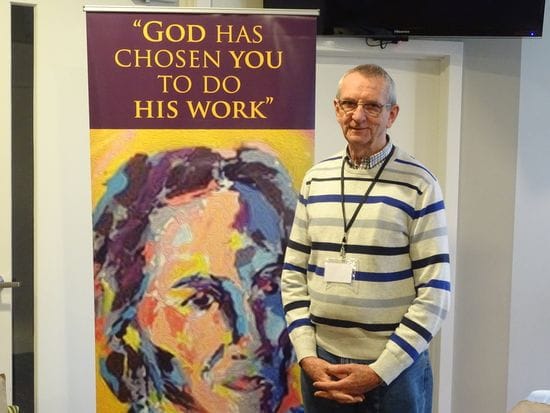 Now based at Logan in Brisbane where he works as a literacy tutor for disadvantaged youth with BoysTown, Br John Pill has had a rich life experience from his 46 years as a De La Salle Brother.

He worked for 24 years as a Principal across four different Catholic schools before helping to lead Lasallian formation programs in Indonesia, Thailand and Singapore.

On the sidelines of a Young Lasallians conference in Melbourne, Br John reflects back on his pathway towards a religious vocation back in the late 1960s.

"I was educated by the Christian Brothers and after leaving school at 15, I took up a clerical position for the petrol company Ampol", Br John explains.

"I was also involved in the Young Christian Workers movement and went to a lot of meetings which involved group reflections on the scriptures and then practical ways of relating that to your everyday life".

"A fellow member of the movement suggested I consider a vocation with the De La Salle Brothers and I went to visit a community in Adelaide at the time and one of the Brothers handed me a copy of the Conduct of the Christian Schools and said he would come back and give me a quiz on it within a month".

"I immediately felt at home with the Lasallians and their strong commitment to social justice", Br John adds.

He was also asked by the Catholic Education Office in South Adelaide to take on a secondment as Principal of Cardjin College in Noarlunga Downs for a year in the late 1990s.

Br John's near half century with the De La Salle Brothers has also included three terms on the District Council and a stint as head of the Interim Lasallian Mission Council in 2009.

What he admires most about the Lasallian charism is its openness to working with people from other religious faiths which he saw first hand as Director of Lasallian Services with the Pacific Asia Regional Conference (PARC) in Singapore.

"I've worked on Lasallian formation programs in a mainly Buddhist country like Thailand and a large Muslim country like Indonesia", Br John explains.

"Through drawing upon the teachings of St John Baptist De La Salle, we've helped to foster greater inter-religious dialogue and understanding without trying to impose our beliefs onto others".

Br John says he has gained a lot of personal satisfaction over recent years from his work as a volunteer tutor with BoysTown and he believes the welfare agency is an integral part of the Lasallian mission in the contemporary world.

"It's helped me gain a better appreciation of what it must be like to be 19 years old and illiterate and what a handicap that must be", Br John said.

"These young people have often got nowhere to go. They can't find work and a lot of them don't have enough money to go out and socialise like other people their age".

"I really see BoysTown as an extension of the work with disadvantaged young people which St John Baptist De La Salle started over 300 years ago in France".