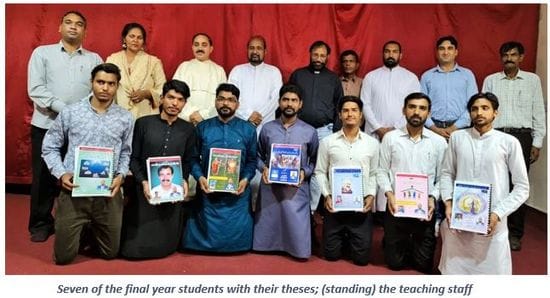 In Khushpur, a very small village in largely Muslim Pakistan are fifty young Catholic men preparing to be catechists. The role they have taken on is support and enrich the Catholic way of life in one of the seven dioceses of their nation. They are 'catechist' students at St. Albert's Catechetical Training Centre (CTC), conducted by the De La Salle Brothers.

Deeply committed to their religious faith, they are preparing to assist and stand in for the priest in sometimes 20 + villages - teaching, leading worship and pastoral support. They will be contacts, helpers and care workers to their Catholic brothers and sisters. (Only 2% of Pakistanis are Christians, of various denominations; many of them are very poor and discriminated against).

A significant recent event at the Centre was the yearly presentation, by fifteen of the final year students, of their researched theses on a topic of their choice. Three such were "The Role of Christian Youth in Pakistan", "The Role of Women in the Bible", and "The Nine Gifts (sic) of the Holy Spirit". As Br. Zafar Daud, Director, reports:

"As the students are promoted to 3rd year, they are given different topics for research... (They) are asked to choose the topics and come up with three, according to their interests. The staff helps and guides them to choose one of them. At the same time, a mentor is provided to each student for further guidance and help. The topics are based on theological studies, Biblical (study)... Church history, social issues and current affairs, well-known personalities and saints' lives. Though the writing resources are very much limited according to the modern world, still the trainees and staff try their best to fulfil their requirements.  The catechists learn how to write a thesis, with a proper understanding of the chosen topic, (and)... also how to develop the ideas with proper references and footnotes".

The staff team includes Br. Zafar, five laymen, one lay woman and Br. Shamoun. They constitute an examining panel which questions the student defending his thesis, judging the presentation critically and grading it on set criteria. The student learns through initial reading, interacting with people for information, research, and writing critically. A great plus, the Staff notes, is the trainee gaining in self-confidence and communication skills. The thesis is an important component of the final assessment for the course and diploma. It is the happy end to great self-sacrifice and an invaluable religious education.

The fifteen young, mature-aged students who presented their theses, received their graduating diploma on 1 June 2021. Some, as married men, were learning with their wives, who attend the on-site Benildus Literacy Centre. (A number of the wives have never been to school before). "The diploma holders", Br. Zafar mentions, "were from three different dioceses - Archdiocese of Lahore, Faisalabad and Rawalpindi Islamabad. His Excellency Bishop Indrias Rehmat (Bishop of Faisalabad Diocese) was the main celebrant for this year diploma Mass and ceremony.

The De La Salle Brothers have been an important group within the Catholic Church in Khushpur, conducting the reputed Centre for the Bishops, from 1963, and running St. Thomas' High School (to 1971). La Salle High School was opened at the request of villagers in 2004. Its current Principal is Br. Qumar Iqbal.  Little Khushpur village is an important facet of the Brothers' work in Pakistan.