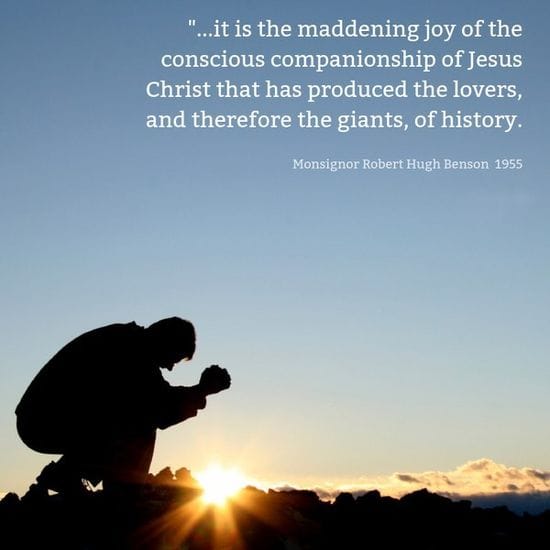 It seems such a tumultuous time in the world at the moment.

So many groups and identities demanding their 'rights'. So many demanding power and influence. Media and political debate seems full of chaos and anger.

Way back in 1955 Robert Hugh Benson was already trying to remind us that the world is more powerfully influenced, in the long run, by those who have deep friendship with Jesus than those who dominate and control the powers of the world system.

Think of St. Peter. An easily 'triggered' fisherman full of the capacity for betrayal and failure but he had one thing that eventually allowed him to transform the planet. He had deep, personal friendship with Jesus. That friendship allowed him to lead the early Church, become the first pope and build the Church of Christ.

We have an election coming up this weekend. The roads are full of signs and threats about how voting for one party or another will mean the sky will fall. The airwaves are full of commentary. It's the bloodsport of modern politics.

But ask yourself this; how many of these candidates or 'brands' are going to be remembered in a year, a month...next week?

In contrast those who build friendship with Jesus build something that it seems remains far more stable, rich, meaningful and permanent.

As a Catholic teacher, your friendship with Jesus, its depth and seriousness can transform young lives. Maybe even only one student but would that be enough for you?

Lord Jesus, help us right now, as we read to turn our hearts and thoughts to you. Let us speak to you easily and always as we would with a friend. A close and trusted friend. In the moments of challenge and hardship each day that we teach may you be the friend who encourages and guides us.

God bless you all.