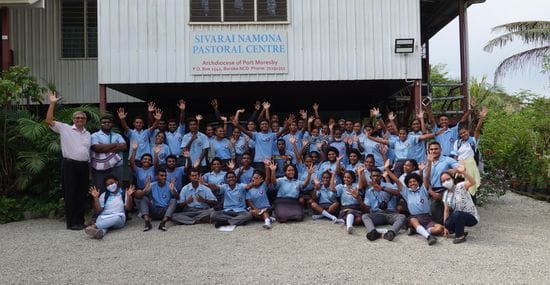 With the theme, ‘Media and Life Relationships’, the Retreat was part of the school’s Pastoral Plan for Graduating Students and was organized by Ms. Sheryll Extra-Isoaimo, a grade 12 teacher of the school.

The facilitators, two Social Communications personnel, took on the challenge to address the young people how the Media has had an impact on our relationships in life, manipulating our Christian values and as young people being influenced to live out our lives as portrayed in the media.

Jessica Oata, who touched on Friendships and Infatuation, challenged the youngsters to form genuine friendships that contributed to their positive growth in life and in the society. She went on further to stress how young people should not allow the media to define their friendships, rather refer to their Christian values as a guide.

Speaking on Infatuation also, Ms. Oata explained that Infatuation was not Love and Love was not Infatuation. She highlighted the traits and results of someone who was infatuated and asked that young people should not be confused as this would lead them to channel and invest their potentials in what could destroy their future.

The second speaker, Isabella Saleu, who presented on Love, shared with the students the qualities of Love and strongly spoke on how purity was still a virtue and should be upheld until marriage. She pointed out how on social media the total opposite of Christian values has been displayed and urged the youths not to allow that to be a normal part of their lives.

Exploitation, as highlighted by Ms. Saleu, was one of the relationships in life where a partner was too abusive or too demanding. Examples of exploitation where you could be charged in a Court of Law were presented to the students as well those that were very subtle but still counted; those were which most people thought were part of culture and life but were actually acts of exploitation.

As each session was presented the students were made to see how each individual had the power to use the media in a positive way or to take advantage of it and use it to destroy themselves as well as those around them.

An additional session themed, ‘Life after High School’ that had two sessions; Life Goals and Life Vocations, was also part of the presentation where insights of what life would be after year 12 and beyond, steps to prepare for and what to expect were openly shared with the pupils from experiences of the two presenters.

During the program, there was time for sharing, prayer moments, energizers, as well as a period for question and answer where students were given the opportunity to ask answers to what bothered them as young people or to simply seek advice.

Fr. Ambrose Pereira sdb and Fr. Marceliano Oabel CM, was also present for the Sacrament of Confession and the celebration of the Holy Eucharist at the end of the day. The Holy Rosary was also animated by the students.

It was a time of prayer, reflection, meditation and an opportunity to learn, share, embrace and appreciate our Christian values that guide us in our journey of life as young people who are more exposed to the advances of technology and the influences of the media.

“I am at this critical phase in life and I am bound to confuse infatuation for Love and by learning the difference between these two, I can be in a better position to make my life decisions.” –Paula Kaiyo

“I liked the fact that it provided an open platform to discuss social issues affecting youths not only in PNG but globally and also to help nourish young minds who are facing everyday life at full toss and guide them to make the right decisions in their relationships centered around Christ, who is the source of life.” –Jalissa Terikian

“I liked the openness of insights shared openly about marriage. Generally, in this country there is a misconception about the Sacrament of Marriage. Many don’t fully understand what marriage is and what it requires thus they end up messing up this idea which should be a blessing from God. Many individuals take marriage lightly and for granted. Thank you for your effort in making us aware of all you taught us today.” –Geraldine Haro

“I liked how the facilitators were young adults like the students so we could relate to and vice versa on the sessions presented and also being able to understand the reason and main concept of the retreat as well as to put myself in certain scenarios mentioned by the facilitators.” –Andrew Talingapua Junior

“The retreat exposes students to what is out there not just after education but in life. I liked that the program was straight forward portraying the importance of the sessions.” –Thomas Kisokau