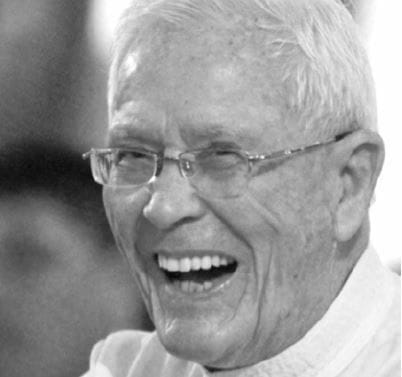 I am pleased to share with you Br. Armin's shared reflection entitled "Harry's Hesed" during the Mass of the Resurrection for Br. Harry.

Sisters and Brothers, today, St. Paul in his first letter to Timothy (2:8) urges all of us, "Beloved: It is my wish, then, that in every place the men should pray, lifting up holy hands, without anger or argument." Br. Harry must have taken this exhortation very seriously for aside from being slow to anger and not keen to argue, Harry prayed constantly. One of his prayers which he disclosed to those closest to him was for the good Lord to allow him to reach the age of 95 after which, he said, the Lord may take him to Himself as He pleases. Harry reached his 95th birthday before his health declined. In God's ultimate kindness, He gave us six more months bonus so we could wallow in Harry's loving presence. Lesson number one: be careful what you pray for!

Australia's distinct food product, Vegemite, was invented just two years before Harry was born and he must have consumed loads and loads of that poison. The brewer's yeast extract from beer production mixed with salt and extracts from malt and vegetables may contain the secret potion for long life. Throughout his 34,884 days on earth, like a generous serving of Vegemite, Harry would spread the one gospel that he knew best: Kindness! Even as a young student, he was a master of social graces and etiquette in Marrickville and, when he joined the Brothers, he taught the same to his disciples. In the English language, the word 'harry' means to persistently carry out attacks but our good Brother was the exact oppositehe would not want to be a burden to others nor to be unkind or impolite or improper.