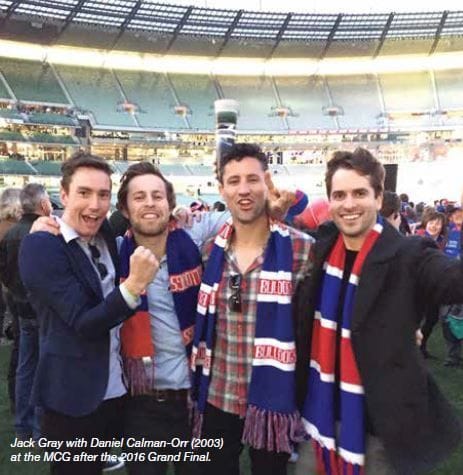 When he was a student at De La Salle Malvern, Jack Gray (2009) says that football ruled his life and as the AFL's Lead for Player Engagement and Activation, he is proud to say it still does. Football pretty much ruled my life during my days at De La Salle.

I was constantly looking out for opportunities to play both at school at outside of school. I played with the Year 9 and Senior teams in Years 10 and 11, winning, ACC competitions two out of three years.

After graduating, Gray completed a Diploma of Sport Development and worked in a variety of roles before landing his dream job in football.

"I had a few casual roles straight out of high school whilst trying to figure out the career path I wanted to take. I did a bit of hospitality and retail work and a lot of manual work which kept me fit."

"As is often the case, a personal contact, who worked at AFL House, helped me get a foot in the door and eventually I was lucky to make it through to a full time position."

His current role as the Player Engagement and Activation Lead, sees him working with all AFL/ AFLW Clubs in conjunction with AFL state bodies on the CBA Player Appearances. Current CBA arrangements require all players to be available for 4-hour public appearances, 21 times throughout the year.

A typical day for Gray sees him attending internal meetings about upcoming projects and campaigns and responding to AFL Clubs and Player managers. Developing young players is an important part of his job, and part of his role involves coordinating the young Auskick players on Grand Final day.

"On the day of the Grand Final, I have organised the Auskick players, including the half-time game and the presentation of the Premiership medals to the premiership players after the game."

"This has become such an important part of the grand final celebrations and fans agree that the young kid's presentation of medals after the game is a real highlight." "Seeing the excitement on their faces running out to 100,000 screaming fans, is an experience you never forget."

For Gray being on the ground for the grand final celebrations is a definite career highlight.

"I have been at the last eight AFL Grand Finals and been out on the ground during the player celebrations, it's a real highlight," he said.

When he is not talking football he still plays for Williamstown CYMS, with which he has had a long and successful football career. In 2014, he was voted Division One Competition Best and Fairest after a consistent season for which his team also took out the flag. In the same year, has also represented the VAFA in their Under 21 game in Tasmania.

De La Salle has many legacies for me. "I still have so many friends that I'm regularly in contact with. I can't say I was the most academic student, but I loved coming to school and interacting with all my mates and my teachers."

In spite of the delayed 2020 AFL season, Gray is busy working with the players making sure they can still engage with their fans.