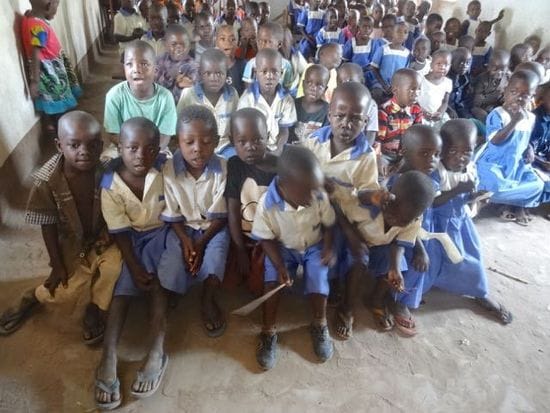 The past two days I have spent in meetings: one with our own Management Team and one of the Central Committee of the Mennonites of which I am a member. The mood is one of increasing optimism. The situation is more stable in Wau and Yambio where displaced people have been returning to their homes. In Riimenze, it is generally quiet but the occasional presence of rebels is discouraging an immediate return of the displaced to their homes. Juba is quiet and mostly stable but there is still a considerable way to go in restoring law and order. Some rural roads, that had been closed as a consequence of lack of maintenance and insecurity, are now open. The economy, however, is still a total mess and many people are hungry in this bankrupt country.

Just this week the government has shut down the biggest, and most effective, telephone provider over some issues that have not been made clear to us. It is a great inconvenience to the ordinary people as well as to us. This was the only fully reliable network in Yambio. So now communication becomes more difficult with our fifteen members in that area. We cannot even call the man who brings our water by tanker here in Juba because suddenly his number does not work. Many people are now scrambling to get numbers on the two other networks. We pray for rain!
There are ongoing peace talks. Why is peace so hard to achieve when all the people want it? If only a break-through could be achieved to reach a genuine peace agreement, I think the country could rebound quite quickly. It wouldn't be easy as many relationships are fractured and there are deep tribal divisions and sectional interests. Bigger picture leadership is needed.

The people of South Sudan are open to healing and rebuilding links as well as being tolerant of hardship. There are many dedicated people here from good organisations who are willing to help and some international donors ready to assist if, and only if, there is peace.

There are signs this country is heading for peace. All we need is for the leaders to give peace a chance.

Just over six weeks ago, an old friend, Allan Drummond from Australia, arrived to spend an extended period in South Sudan assisting our Solidarity mission. After he was several weeks in Juba, I asked him to make a visit to some of our ministries. Allan has published many books and is an insightful and a creative author. So I asked him to write about some of his first impressions. This is what he wrote:

My first impressions of Juba is that chaos reigns, and why wouldn't it, after all that this country has gone through? My second impression of the place is that Rafferty's Rules apply, and my third impression is that you have to expect the unexpected at all times. The airport terminal, where first impressions are formed, is said to be the worst in the world; the currency is handed over in bundles of one hundred with an elastic band around them; and policemen can pull you over and demand to see your permit to carry a fire extinguisher, or pay a SSP1500 (about $6) on the spot fine no receipt of course, and no interest in whether you have the fire extinguisher itself!

My job here is to be a sort of mine host, chauffeur and chandler for the good ship Solidarity with South Sudan of which Bill Firman is currently the master. But today I was called upon to take minutes at a meeting of the principals of the four major projects that are currently run by Solidarity, and the discussion clarified many of the obstacles that must be overcome to make projects like these effective. These include matters like the universal antipathy to the use of cheques, disagreements which individual clergy who might have forgotten about a formal memorandum of agreement on the status of Solidarity, and changes of policy by well-meaning international sources of funds, which suddenly render a well-planned submission for funds unacceptable because it doesn't fit the new guidelines. 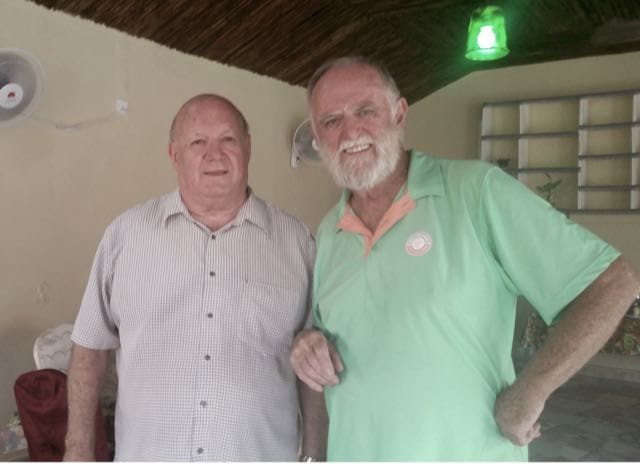 Running a show like this requires the patience of a Job.

But my fourth, and most lasting impression is that the Solidarity thing, at least, is working. At some point later this year, Solidarity will have been in South Sudan for ten years. That's not just ten years. That's ten tough years for this country, in which some of the heroes have had to confess to being of a common humanity with the rest of us, and have undergone programmes such as Healing the Healers to help them overcome the effects of the stress that they have experienced. Solidarity has witnessed the murder of a religious sister/doctor from one of their member congregations who was doing nothing more nor less than her job in the middle of the night when she was killed. And there have been occasional life-threatening situations for Solidarity members. 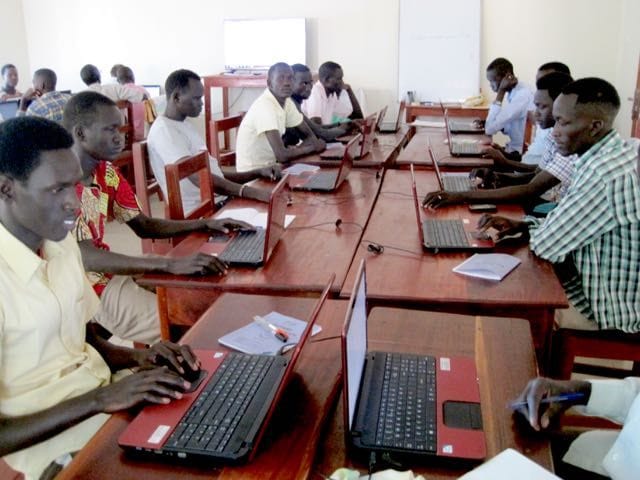 Solidarity has stuck it out for ten years, but it has done more than that. It has built up viable, constructive programmes in that time, with great support from benefactors all over the world, and that support is recognised by locals for what it is. Why even the policeman who pulled me over to fine me SSP1500 changed his mind and said: "Oh! I see you are with Solidarity. Just give me 800."

On a more uplifting note, I have accompanied two of the sisters to a local dentist who, on the first occasion, refused to take any payment for his services. On the second occasion, my passenger was armed with an envelope stuffed with the local, devalued currency, determined to press it upon the good man. "No! No! I will not accept it," he said. "You are beautiful people, coming to help my country. I will not accept anything from you."

I have been fortunate to be able to visit some of the projects run by this organisation, and I take my hat off to them, both for the quality of the work they are doing, and the spirit of community with which they are doing it.  At Yambio there is a teacher training college with students gathered from all over the country: from different ethnic groups which are fighting one another elsewhere but living together in harmony here. In a sense, they have to. They are stuck with one another for two years, for travel is currently too expensive and dangerous for them to be able to go home, even for the long holidays. But the multinational staff is the catalyst for something more than just putting up with one another. I have a sense that the students see themselves as something of torch-bearers for their country.

It takes one and a quarter hours to drive to Riimenze, though it is only thirty kilometres. The golfers among you will understand me when I say that the bunkering is superb, demanding clear vision and planning on the part of the driver, but also a readiness to change the angle of approach as required. It's a bit of a metaphor for the whole country really. About a hundred metres or so from the road, I saw a teacher with a class of about twelve students, doing their best to teach and to learn in the shade of a mango tree. There are so many people trying to lift this country up.
Brother Christian took me for a walk around the displaced persons camp which has swelled to some 7000 people. Christian was acting as a truant officer, asking kids he knew should have been at school why they were not. As with our own Australian Aboriginal children, it is hard to establish continuity, though there is a steady number who see education as the best way up. There is a Brothers of Christian Instruction school a few km away which has the advantage of being a boarding school. Once kids are in, they have to go along with it. 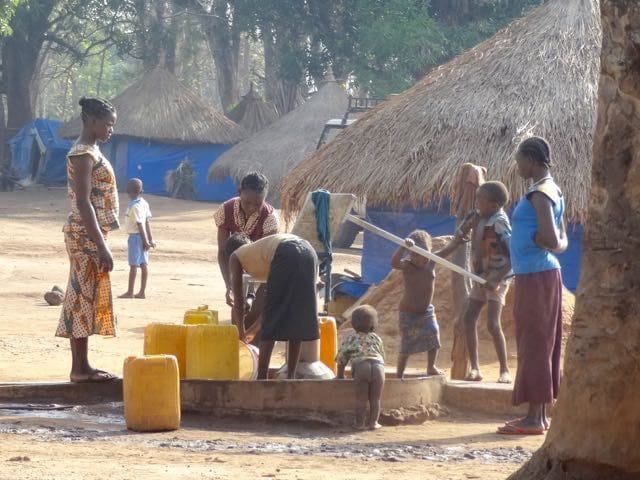 I noticed as we walked through the camp, a few water pumps, mostly installed by Solidarity. I well remember campaigns some years ago to make clean water available to villages such as this, and I thought to myself, "There's something else that has worked." Sr Rosa has been in Riimenze for ten years and she hasn't been wasting her time! Her special project is the farm which is a centre of agricultural training for farmers in the surrounding countryside. When I was there, a workshop was being held on the farm, with 21 of the 'locals' in attendance they sleep in overnight to save travel time. It was being run by Mathias, a Hamburger who works with Caritas on a number of projects in South Sudan, but who obviously has a soft spot for this one. From the outside, the men seem to be very much engaged but, talking to Mathias one night, the real problem is to get people to 'invest' in a farm on a more permanent basis. Land is generally owned by the ethnic community, and not by individuals. According to Mathias, families have traditionally been semi-nomadic, moving over large tracts of land in a seven year cycle, and producing a limited variety of crops. On top of that, there are practices like burying the head of a family, covering him with stones and moving away. How do you change that? Probably by showing them the benefits/fruits of an establishment like Rosa's. 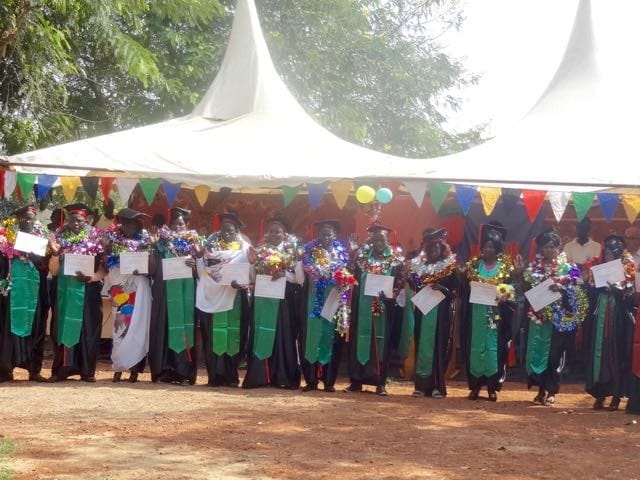 I spent a weekend at Wau, some 600km NNW of Juba, visiting CHTI. The agile minds among you will already understand that to mean Catholic Health Training Institute, a school for some 120 students who follow a three-year course in nursing or midwifery. There is a way to go here as to who recognizes what diplomas or degrees. Discussion about that could, and does, go on, but the discussion doesn't do anything to change the statistics from a few years ago that a fifteen year old girl is more likely to die in childbirth than she is to complete her secondary schooling. CHTI is held in high regard in this country, and in the minds of international donors who finance this and other projects.

There are plenty of situations where you are tempted to throw your hands in the air in despair of this country. It's been my privilege, however, to see for myself the groundwork being laid for better things to come, and to share the optimism of the Solidarity community.

Allan has a lot more reflections to offer but I asked him to keep this one brief. We have twenty-nine expatriate people in South Sudan who comprise Solidarity plus more than one hundred local employees plus other dedicated people assisting in other countries and very supportive donor/partners. We thank God for every one of them, including Allan, as we sail together on a voyage of hope and aspiration.