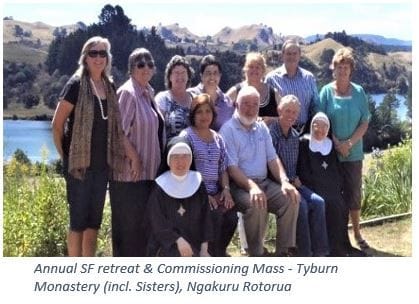 What does any good family offer its members from its richness? Take your pick!. For the "Signum Fidei" (SF) Group at John Paul College, Rotorua, New Zealand, it's varied and deep. The inspiration to form the Group rose, says the Co-ordinator Bernadette Fredricksen, from several staff members witnessing the work and dedication of a community of Brothers who were based at John Paul College Rotorua in the late 1990's.  These Brothers - Peter Ryan, Declan Thompson, Owen Mason and Hilary Walsh "inspired these teachers to understand more fully what it means to be Lasallian.  Fast forward to 2008 ...  Brother Ambrose Payne visited the College and invited the group of teachers to form a SF communitywe began a 12 month time of discernment, with the encouragement of Br. Ray Khan".

Globally, throughout the Lasallian world, from the 1970's, lay persons who wanted a more committed Christian life asked the Brothers to share more closely with them - not just their educational work, but their own spirit- the "Spirit / Sign of Faith" ("Signum Fidei" in Latin). John Baptist de La Salle had made it the bedrock of his Institute with the first Brothers. (It appears on the official Institute crest). These communities are now found in thirty countries of the world including Peru, Mexico, Lebanon, the Philippines, Spain, Madagascar and New Zealand. (Bernadette was a delegate at the Second Signum Fidei Congress in Rome, in 2013).

From the very beginning, says Bernadette, who is also the Campus Minister at the College, "we all agreed that St. John Baptist de La Salle would want us to work with students and families who were in need.  We wanted to be witnesses of faith, supporting the students in their faith journey, showing care to those most in need", not only academically. With several ethnic groups within the school community - Pacifika, Maori, Filipino, the SF Group communicates with students and their families, getting to know them first, before identifying ways of service. It can be sourcing school uniforms, stationery, subsidising school camp fees, academic mentoring, attending cultural celebrations, visiting Tyburn Monastery for Reflection Days, supporting Camp La Salle, and being present in the parish.

Signum Fidei meets officially twice a term on Tuesdays from 4pm, in the Hoani Paora Whare Tapere.  There is prayer, a reflection and discussion.  Quite often, a De La Salle Brother might be visiting the College, and their presence and contributions to meetings are much appreciated.  An agenda of items on projects and action plans are worked through.  There is a constant awareness of adapting to new needs.  A shared meal that creates community follows.  (Members also have their own individual projects, which includes tutorials, home visits e.g. family bereavement, delivering food parcels etc.)  As Veronica Aislabie says: "I have gained friendship in community, spiritual nourishment and a sense of purpose for mission. Belonging to SF has deepened my understanding of students, who are on the fringes."

Interestingly, this unique SF community of Kiwi teachers includes members from many faith denominations.  Our common bond is to serve those students "entrusted to our care", to quote John Baptist. "I have gained an inner desire to be part of all endeavours of Signum Fidei for the community, i.e. my sense of responsibility for the good of others deepened", mentions Renee Pingol. Staying true to the work of De La Salle, this Lasallian community decided, as he did, to rely on divine Providence.  "We don't have a budget or financial framework for our projects", says Bernadette.  "This may seem unusual, but it is how we have always worked.  At our annual retreat in February, we dedicate all our work to God.  We see our SF journey as a walk of Faith and Service in building up our community. Having said that, John Paul College has a strong tradition of supporting social justice projects.  We have a generous PTA and Board of Trustees, who are aware of our projects, and are always there to support when the need arises. We are great networkers too! There is always someone who knows someone who can help us with our projects ... that's the real gift of our community".  Sheryl Hewitson sums up the richness of the Group's ministry and life: "Strength from our community, spiritual enrichment, and a sense of accomplishment helping others."

The group regularly hosts visitors who are connected to the Lasallian mission and as a community feels indebted to the DLS Brothers who unconditionally support and encourage in the mission to provide "a human and Christian education to the poor".  Throughout its eleven years, "our community has developed strong bonds and affiliation with many Brothers who have helped shape us, individually and collectively, as Lasallians. For this we say ... thank you