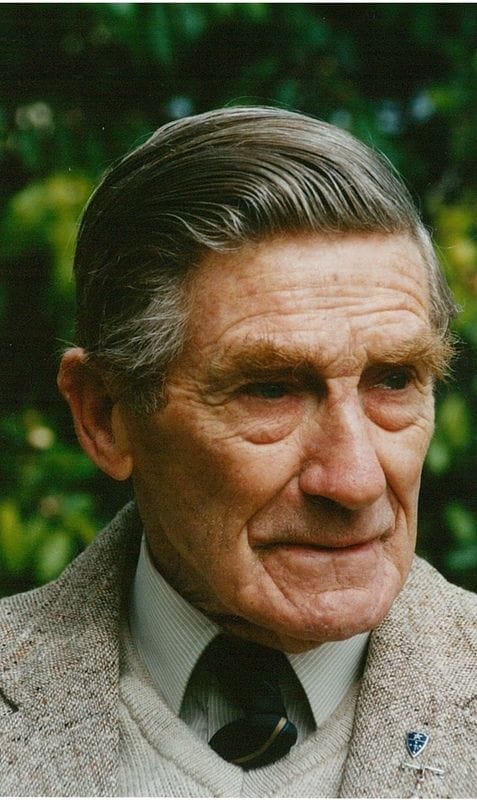 Doyen lay Lasallian, Mr Hilary Joseph Hayes died on the 4th July 2019 in the Wodonga (Vic) Hospital after a short illness. He was in his 96th Year.

Born in 1924, Hilary's adolescent years were spent in Kambrook Rd Caulfield a mere 3.5km from De La Salle Malvern so it was perfectly natural that the greater part of his education was completed at his beloved alma mater, De La Salle, under the long Principalship of Br Jerome Foley, one of the founding Brothers at Malvern in 1912. Hilary and Br Jerome enjoyed a friendship which continued until Jerome's death in 1978. One of his class men was J E (Eric) D'Arcy, later Archbishop of Hobart. They remained lifelong friends until Eric D'Arcy died in 2005.

After leaving school in 1942, Hilary commenced training for the priesthood at Corpus Christi College Werribee, however, after one year he withdrew and took up employment with a leading Melbourne law firm Mallesons. Although not a Solicitor, Hilary qualified as a Legal Executive and became highly proficient in a number of matters including conveyancing. Right from this time, Hilary became a strong supporter of the work of the Brothers either by providing direct assistance to the Principals at Malvern and indeed the Br Visitor, which Br Jerome became in 1946. After the re-founding of the De La Salle Malvern Old Collegians Association in 1946, as past students returned from WWII, Hilary became heavily involved in various capacities. This culminated in him being the longest-serving Honorary Secretary of the Old Collegians Association for some 15 years unbroken. At the same time, there were moves afoot to establish a National Federation of De La Salle Alumni. This required travel interstate to meetings, at his own expense. Hilary designed the Federation Lapel Badge which featured the "Lasallian Star" mounted over the Southern Cross on a blue background. He wore that lapel badge on his jacket coats for the rest of his life. The Federation carried on for some years, but in the long run, it was not sustainable for a number of reasons. Hilary always regretted this fact in part because he put many hours into trying to ensure its success.

It is a matter of historical fact that Hilary was instrumental in the securing of the "Kinnoull" property in 1955 for use as a Preparatory College for De La Salle. Loan funding was not able from normal sources. With the consent of Br Jerome Foley, the then Provincial, Hilary approached the General Manager of the National Bank in Melbourne for whom Mallesons acted. The bank said that they would make the necessary loans funds available IF the Catholic Archbishop of Melbourne, Daniel Mannix would go guarantor for the loan. Hilary arranged to see Dr Mannix at Raheen and took back the message from him to the General Manager of the NAB, that he, Dr Mannix would guarantee the loan on the proviso that the loan was made available in the first instance, not the other way around. The loan was duly secured and the Kinnoull property was purchased.

With his undoubted administrative and legal skills, Hilary was part of the steering committee that saw the establishment of the De La Salle Old Collegians Amateur Football Club in 1955. After 64 years the club remains a much-admired part of the VAFA in the Premier Division to this day, a very public face to the College itself.

Hilary took over the family property at Long Swamp near Yackandandah in 1960 and became a successful grazier and beef cattle breeder. He was active in civic affairs including the Albury-Wodonga Landholders Association. He continued his involvement in matters Lasallian with trips to Melbourne and Sydney in his 1948 Rover. Hilary and his wife Hilda raised their three children Hilary, Adrian and Elizabeth at Long Swamp.

In the early 1970s under the Principalship of Br Damien Harvey, Hilary was commissioned to write a history of De La Salle Malvern. He laboured over this for many years and interviewed many people including Br Jerome Foley. Hilary produced a draft of several hundred thousand words but alas it has never been published and is perhaps waiting for someone to pick up where Hilary left off. It was a matter of great regret for him that as Malvern approached its centenary of foundation, its history had still not been documented.

For these many reasons of service to the Brother since 1942, Hilary was made an Affiliate of the Brothers in 1989 during the term of Br Bill Firman as Visitor.

Hilary maintained strong and long friendships with many Brothers, friendships which were sustained by the regular exchange of correspondence. Included in that group were Damien Harvey, Baptist Will, Jerome Foley, Julian Watson and Finian Allman to name a few. His admiration and affection for the work of the Brothers never dimmed throughout his long life.

Hilary had a strong faith and worked diligently with a succession of Parish Priests in the Beechworth (Vic) Parish, which included Yackandandah and Osborne's Flat.

De La Salle College Malvern continues to award each year to a member of the departing Year 12 cohort the "Hilary Hayes Outstanding Leadership Award". It had been Hilary's practise right up until the most recent recipient in 2018 to write to the awardee with a note of congratulations.

Hilary's funeral Mass took place at St Matthew's Yackandandah on 11th July presided over by Fr Peter-John Neivandt PP, with whom Hilary had developed a strong friendship since his appointment as PP.  Brother Bill Firman represented the Brothers. Hilary was buried in the Yackandandah Cemetery with his wife Hilda who predeceased him by some 16 years.