Identity Criteria for the Vitality of the Lasallian Educational Ministries 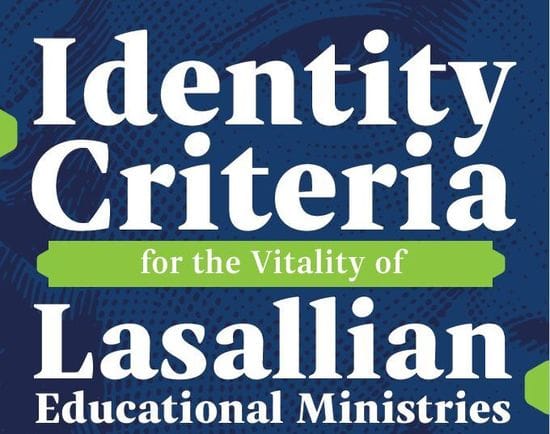 From his early years, John Baptist de La Salle had the custom of asking God to guide him in discerning the direction of his life. This attitude of Holy Spirit-inspired searching accompanied him throughout his life. When the rst teachers abandoned him, when he faced difficulties with the Writing Masters, when he returned to Paris from Parmenie, he had recourse to prayer.

De La Salle's total commitment to Jesus Christ and the Reign of God led him to respond to the educational needs of the sons of the artisans and the poor. Inspired by the Gospel and encouraged by his Brothers, he set about writing books, designing educational programs and establishing a variety of educational communities. All this was done in order to effectively announce the Gospel to the poor through the ministry of human and Christian education.

John Baptist de La Salle accomplished his work in association with other men who shared his commitment to Jesus Christ. By common agreement, those rst Brothers decided to give their lives to the human and Christian educational service of children and young people. They prepared themselves spiritually and intellectually and they organized schools. Most importantly, they were witnesses to the Gospel and examples of Christian living. At the end of his life, De La Salle exhorted his Brothers to maintain unity of spirit because he believed that united in mind and heart they could provide a meaningful education.

Dear Brothers and Lasallian Educators, following the example of our Founder, I invite you to recall the signicance of our educational service, to respond creatively to the needs of those entrusted to our care and to maintain unity of heart and mind among yourselves.

May the living out of the Criteria for the Vitality of Lasallian Educational Communities strengthen our identity and increase our effectiveness in providing a human and Christian education to all, especially those who are poor and on the margins of society.