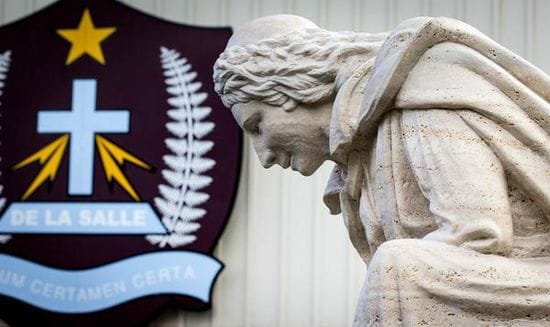 Sixteen senior students of De La Salle College, Mangere East participated in the College's first Kairos retreat over the weekend. Held at Houghton Bay Bush Camp north of Auckland, the Kairos retreat program is a popular multi-day format of retreat for young adults inviting participants to encounter God through their life stories and those of others.

"Elective retreats are a wonderful opportunity for older students to engage in their faith journeys on a deeper level than compulsory, large-group reflection days ordinarily allow," she reflected.

"Kairos is a highly effective program because it is accessible to all students - everyone has a story. It is also a natural fit with our Lasallian spirituality, which calls our attention to a loving God who journeys with us and is clearly present in our day-to-day experiences of community."
Mr Dermot English, Deputy Principal at De La Salle College, was instrumental in bringing the Kairos program to the school.

"Two of my three sons experienced Kairos while students at St Peter's College," he noted. "After witnessing the long-lasting impact it has had on their lives, I wanted to make Kairos available to the students at De La Salle."

At the close of the retreat, the student participants were given the opportunity to express their thoughts about the experience.

"It was life-changing," many said. One student notes that "It made God's unconditional love real for me in a way that it never was before." After such a positive response, Mr English plans to run the Kairos program on a regular basis at the school.