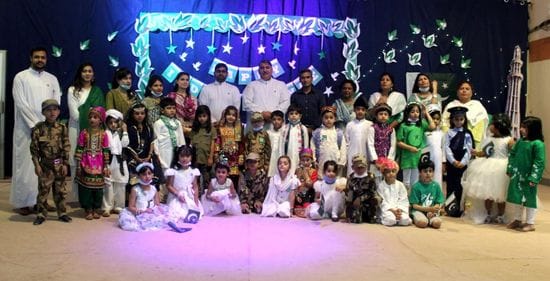 Pakistan came into existence on 14th August 1947 due to the untiring efforts of great leaders like Allama Muhammad Iqbal and Muhammad Ali Jinnah, who aimed to create a separate state for the Muslims and the minorities of the Sub-continent. The people of Pakistan celebrate Independence Day on 14th August every year. The main Independence Day ceremony takes place in Islamabad followed by a 31-gun salute in the national capital and a 21-gun salute in the provincial capitals.

At the beginning of the month, special stalls, funfairs, and shops are set up across the country to sell national flags, badges, pictures of national heroes, and other celebratory items. People happily decorate their vehicles, homes, and streets with national flags, banners, candles, and lamps. People start the day with special prayers for the integrity and solidarity of the country.

Public functions, parades, seminars, televised transmissions, music and poetry contests, children's shows, and art exhibitions are common celebrations. Along with the flag hoisting, the national anthem is sung at various government places, schools, residences, and monuments on the day. Homage is paid to the people who lost their lives during the migration and riots which followed the independence in 1947.

This year La Salle Higher Secondary School, Multan, organised a special program to highlight the importance of Independence Day. Along with the teachers and the students, parents were also invited to the program.

The program included a recitation from the Holy Quran and the Holy Bible and hoisting the national flag. Students participated in a talent show which included singing patriotic songs, a colourful tableau, speeches, a dress show, a skit about the personalities and the contribution of the national heroes of the freedom movement and dance performances.

To conclude the program, Br Shahzad Gill shared his views and insights and congratulated all those who participated in the program.