Home >  Blog >  Interview with Tracy Adams: "The worst thing you can do is let that fear take over..."

Interview with Tracy Adams: "The worst thing you can do is let that fear take over..." 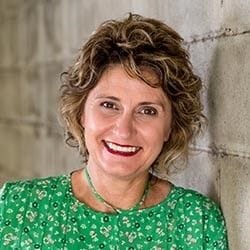 In three words, who is Tracy Adams?

I think I am energetic, optimistic and driven.

What are you driven for?

My main role is the CEO of yourtown, I am also   a member of the District Consultative Committee and have a number of other Board roles unrelated to the Lasallian Charism.

There's a saying that if you want something done, ask a busy person and I'm a firm believer of that but I manage it okay I think.

I want people to think about how we can't continue to do the same thing all the time. We need to be cognizant of becoming too comfortable, and always challenge ourselves to do better and do more.

One of our focuses at  yourtown is to create impact for generations to come and a key focus of mine  is to challenge people so we deliver on that, and  lead by example.  Sometimes we spend too much time talking and not enough time doing. We just need to get things done and be focused and allow ourselves to not become too  comfortable in the way we go about things. Just because we run things well, doesn't mean they can't be run better and we should aspire to do better

Are you a strong believer in actions speak louder than words?

How did you become a Lasallian?

I started about 29 years ago, in the most junior position in BoysTown for what was meant to be  two days and I've been there ever since. BoysTown has now become yourtown. I'd never heard of the Lasallian Movement before I worked there, and over time I became part of it. Over the last decade or so  I took on more and gradually found myself to be a Leader.

Was your goal as a young person to be a Leader?

What was your goal?

Well, I left school and didn't go to University. I got a job and moved to Western Australia to work in the gold mines for a while. After that I went to Brisbane, I  didn't think I would stay there, but I am still there.. I  believe  I have the capacity to learn and try to take those learnings and apply them. I love to learn.

I think if there are times in your career where you need to step up to a challenge, and by doing so it can shape you for the future.  I have  had a number of challenges to deal with, and you just deal with them. Gradually you can become someone  that people see something in.  I would be true to say that over the years I have  suffered at times from  from 'imposter syndrome', something I have learn is quite common for woman.  When I was  tapped on the shoulder or provided with an opportunity,  I often felt that  I wasn't cut out for this and that sense of not being good enough for certain  roles. At times I can be my  own worst critic.

I was never going to apply for the CEO role when it became available 12 years ago but   a friend of mine  said to me "The only reason you're not applying for the job is because you're scared you might not get it. Are you going to let fear win or are you going to give it a go?".  I think that really thought me that letting  fear take over before you have given yourself a chance can be and could have been very damaging.

What does Lasallian mean to you?

It really means for me being Brother and Sister. There is a strong social justice presence  and I see education through a lens that isn't necessarily about school or intellectual education. Education for me is when people can develop as individuals and as I said earlier too many people aren't being afforded those opportunities, and I think being Lasallian means we can look for those opportunities,  and provide them, to allow the dignity of the individual to come through. I think education in its intellectual sense is critical, but I think if the young person isn't ready for that opportunity than we have to recognise that. It worries me that in this country a country of richness compared to so many others, there are at anytime more than 100,000 kids who are not going to school, I don't think that's okay and I certainly don't think it is okay to see so many more not be afforded the opportunity of education across our District.