Home >  Blog >  Islam and Catholicism: Towards a Dialogical Mission

Islam and Catholicism: Towards a Dialogical Mission 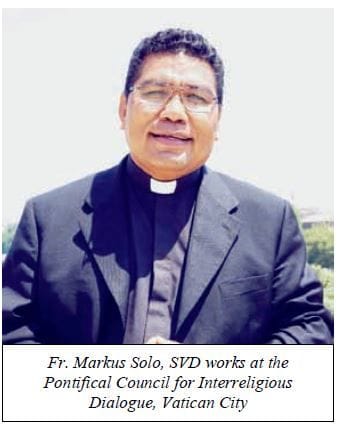 At the beginning of my reflection on "Mission in Islam and Catholicism" which is the common topic of today's seminar, allow me to raise a few difficult questions as a point of departure: Are Islam and Catholicism missionary religions? What does mission mean? Is it imposing one's own faith on others? Can there be dialogue between missionary religions? How can Catholics and Muslims understand their missions in the contemporary world to serve peace and unity?

No doubt that both Christianity, including Catholicism, and Islam are missionary religions. Both can look back on the history of their expansions to various parts of the world, which commenced more than 2,000 years ago for Christianity and more than 1,400 years for Islam. Various historical sources and contemporary witnesses hold diverse experiences in their personal and collective memories.

If Christianity were not a missionary religion, it would never have left Israel, where it was born, to be present in the entire world. If Islam were not a missionary religion, it would not have been possible to expand beyond the Arabian Peninsula; it would never have taken the way through the Balkans and into Europe, from Africa to Spain and France, from the silk road that started in Asia Minor to China and finally to the rest of Asia.

Without going into the details about the spreading of these two great world religions, it is important to acknowledge that both religions have always had a strong missionary nature which perdures to this day. Yet, our path into the future depends on grasping how each of them understands the nature and purpose of mission. It is also crucial to know how Muslims and Christians seek to present this understanding of mission to others. In fact, Islam and Christianity use different methods and terms, but also have some commonalities.

The Burden of History

Generally speaking, the Christian term "mission" faces much skepticism among Muslims, in part because mission is associated with past colonialism. It is a historical fact that in some parts of the world, the rise of nationalism and religious radicalism during the colonial era went handin-hand. Today, anti-colonialism propaganda is still used and instrumentalized to trigger hatred, discrimination and intolerance towards minority Christians in various parts of the world.

This is based on the argument that Christians are colonial minions, and Christianity is the religion of western colonialists. This attitude is due, among other things, to the history of missions in the period of colonialism, tragically marred by the linking of "the 3G" (gold, glory and gospel), as the saying goes.

Also, some Muslims mistakenly claim that Western is, automatically, Christian, and Christians outside Western environments are, therefore, foreigners with no right to exist. In some other parts of the world, Christian mission is considered with suspicion as a strategy for converting people who do not believe in Jesus Christ. This misunderstanding happens along with lack of knowledge about various denominations within the Christianity, leading to a shortsighted generalization that all people who believe in Jesus and wear the cross are one and the same. It is imperative that this be corrected, because various denominations have different understandings and practices of mission based on different interpretation of the sending commissions initiated by Jesus and recounted in the Holy Bible.

In Islam, da'wah is the rough equivalent of mission in Christianity. Da'wah activities are aimed, in some parts of the world, to counter and neutralize Christian missionary efforts. In Indonesia there is, for example, the Muslim Muhammadiyya mass organization that claims around 50 million followers in the country and preaches an orthodox Sunni Islam. It was established on 12 November 1912 in conscious resistance to Christian influences at the same time, and it imitated methods of social assistance used by Christian missionaries.  Theologically, da'wah, however, does not play nearly as important a role in Islam as mission does in Christianity, where it is one of the basic theological principles. I will return to this key difference momentarily.

The reality of mission in the Church is based on Jesus' commandment in the last chapter of the Gospel of Matthew. Its practice has evolved over time, up to the present moment, which is imprinted by the paradigm shift of the Second Vatican Council.

Jesus ended His three years of proclamation by instituting the universal mission that He Himself gave to the disciples, and thus to Christians in all generations. "All authority in heaven and on earth has been given to me. Go, therefore, make disciples of all nations; baptize them in the name of the Father and of the Son and of the Holy Spirit, and teach them to observe all the commands I gave you. And look, I am with you always; yes, to the end of time" (Matt. 28:18-20).

The Second Vatican Council's Document on Mission Activity, "Ad Gentes," states the very nature and goal of the Catholic Missions, saying: "Divinely sent to the nations of the world to be unto them "a universal sacrament of salvation," the Church, driven by the inner necessity of her own catholicity, and obeying the mandate of her Founder (cf. Mark 16:16), strives ever to proclaim the Gospel to all men" (AG 1).