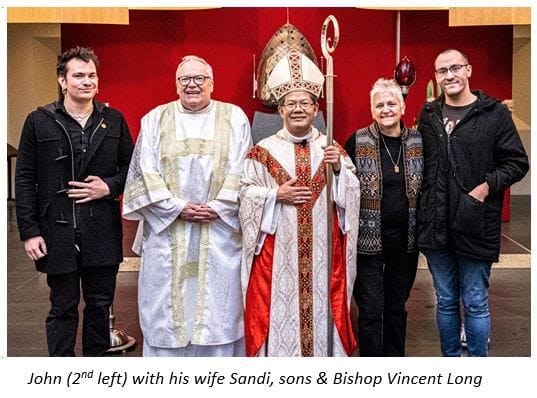 How might one offer service as a mature educated Christian in the Catholic Church of today? John Collins, an old Boy of De La Salle Malvern, has been appointed a deacon in the Diocese of Parramatta, in western Sydney, by Bishop Vincent Long, OFM Conv. John, married to Sandi, and with two sons Paul and Bede, discerned at a more mature stage of life, that this was a calling by God.

At the ordination on 11 June 2021, the Bishop mentioned that the Parramatta Diocese is enriched by its deacons, and is home to “one of the most diverse and dynamic groups of permanent deacons in Australia”. John’s gifts, he said “as an academic, a teacher, a pastoral supervisor and a marriage counsellor have helped many”.

Christian ministries are increasingly (being) reimagined and revitalised, by way of relational maturity, mutuality, collaboration, and partnership.

The eldest of eight children, John hails from present-day Malvern East and completed his secondary schooling at De La Salle, graduating in 1973. Work and travel followed before teacher training at Christ College, a time with the Missionaries of the Sacred Heart and completing a Bachelor in Theology. Moving to Sydney, John upped his qualifications with a Masters in Theology and in Education (Pastoral Guidance). In the field of Catholic education, he had a kaleidoscopic career in pastoral education (Centrecare), research and social policy (the Bishops’ Conference), Catholic Enquiry Centre, and finally being awarded his PhD (ACU) in 2013.

John remembers the positive influence of Brothers Urban Murray, William Firman and Damien Harvey in terms of their integrity and inspiration. The sense of Christian vocation, initiated at home, grew with him: “I could not seem to shake it”, and became a practical life-trajectory of service to others.

In recent years and with his wide teaching experience, John was instructing fellow deacon-candidates at Parramatta. This was coupled with his own formation led by Deacon Tony Hoban. There was a pastoral placement and mentoring with Fr. Ian McGinnity at North Rocks. He also trains seminarians in pastoral ministry and supervises their placements.

John sees the culture of the youthful Parramatta Diocese, which he serves, as still forming. However, “the pattern is set with regard to radical inclusivity in terms of cultural backgrounds, expressions of faith and gender diversity”. As for the diaconate in a 21st-century Church, the practice (at least in Parramatta) is to look and serve beyond any one parish, as a minister of “the Word and Charity” to the whole diocese, and to form and support lay Christians as they go out to the wider world of business, the arts and politics.

In the ‘permanent diaconate’ there is no notion of a preparation for priesthood, of being ‘half-baked’.

John’s hugely broad experience and skills fit him for his new role in the western Sydney community.