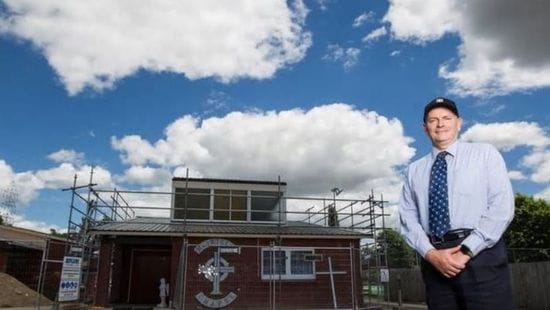 Picture: John Paul College principal Patrick Walsh in front of where the performing arts centre will be. Photo / Stephen Parker

A $4 million performing arts centre being built at Rotorua's John Paul College will rival similar centres around the country and fill a void left by the closure of the Sir Howard Morrison Performing Arts Centre.
Principal Patrick Walsh said, once completed, the state-of-the-art facility would boast a dance studio, music suite, a drama suite and a "black box", an unadorned and windowless room for performance.

"The performing arts centre has been in the pipeline for the past three years," he said. "I believe the time is right for Rotorua with the loss of the Sir Howard Morrison Performing Arts Centre."

Doors to the Sir Howard Morrison Performing Arts Centre were closed in November 2017 after the Fenton St building fell below earthquake standards.

However seismic strengthening and refurbishment of the building are progressing, with construction scheduled to begin this year and a reopening expected in 2020.

"The new college facility will be as good as anything offered in Auckland and Wellington and will not only benefit the students, but also the wider Rotorua community," Walsh said.

The former John Paul College hostel on the school's Mackillop Campus, believed to be about 50 years old, is being remodelled to home the new facility.

"There's a bit of old to go with the new although I have to admit not too much old."