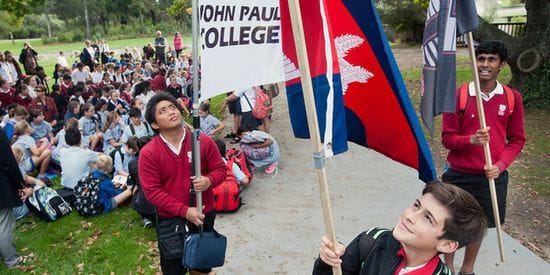 Students from John Paul College Rotorua have led a strong fundraising effort for disadvantaged communities in Cambodia as part of the 2016 Caritas Challenge.

The Lasallian secondary college was selected as the host school for the Diocese of Hamilton for this year's challenge, bringing together numerous Catholic primary and secondary schools in the region for a pilgrimage walk on April 5.

Last year the Rotorua school raised funds for needy communities in the Philippines through a basketball challenge, while the previous year, it led a walk for water for the Solomon Islands.

"This year we really wanted to do something special to show our solidarity with the people of Cambodia", explains the Assistant Director of Religious Studies at John Paul College, Veronica Aislabie.

"They are struggling to overcome a number of issues, including illegal logging, land rights issues and a subsistence lifestyle in many rural communities".

John Paul College joined with six other Catholic schools in a four kilometre walk to show their solidarity for the people of Cambodia.

Prior to the walk the community united at a Mass at St Michael's Church which was celebrated by the Bishop of the Diocese of Hamilton, Steve Lowe.

During the walk, the students and staff stopped for prayer and reflection at four different prayer stations around Rotorua, each dedicated to the four founding charisms of John Paul College.

This included a prayer to our Founder, St John Baptist de la Salle, to St Mary of the Cross Mackillop and to Saint John Paul the Second.

At each prayer station, the students united in a prayer for the Cambodian people, responding with 'Lord, hear the cry of the earth and the poor".

"We have been overwhelmed by the generosity shown by our community through fundraising for the event', Veronica Aislabie said.

"We see our commitment to Caritas as a clear way to implement our Lasallian values of Faith, Service and Community".

"Ultimately they come from the broader Catholic Social Justice Principles of solidarity, stewardship, respect for human dignity and preferential option for the poor".

John Paul College students have now turned their attention to planning their next project as part of Caritas Social Justice Week in September.