Kane Raukura joins the LMC Board 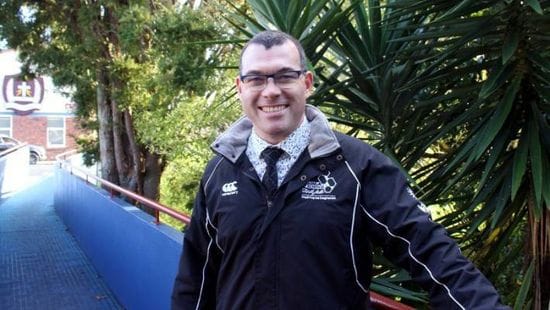 Kane has over 20 years' experience of education within New Zealand and is an alumni of the University of Auckland. A double major in Analytical Chemistry and Marine Zoology, Kane has led the Science Faculty at De La Salle College Mangere for the last 15 years. Under his leadership, both the faculty and his students have excelled and academic results have been outstanding with achievements well above national guidelines. Kane's continued dedication to educational excellence has seen him recognised at the highest level and he has been honoured with the following awards.

As past Head Boy of De La Salle College Mangere, Kane's continued love, passion and dedication to the Lasallian Mission is something close to his heart. Working closely with the De La Salle Brothers and truly working to deliver our mission is a personal conviction that drives his work, actions and teaching vocation. These values and traits were recognised by the District and Kane was made an affiliated member of the Brothers in 2017 (AFSC).

Kane sat as a Board Member of De La Salle College Mangere for three years and now sits on the Board of Sancta Maria Catholic College in Auckland as the Bishops Proprietors Representative.Currently, Kane is the Chairman of the New Zealand Sector Mission Council and has been involved in this capacity since the days of its inception well over 10 years ago. Heavily involved in New Zealand Formation development, Kane has participated in numerous personal programmes in support of mission. These include the previous programmes held in Narooma, Lasalle Bankstown, CIL in Rome and Buttimer in the USA. Kane has presented numerous times at District events and is always well received and respected. Recently, he presented at the inaugural Brother Gerard Rummery Institute 'Together for Mission' Program and is also the online facilitator for his third class with the John Johnston Institute running out of Washington DC (the District of DENA).

2020 will see Kane step away from De La Salle College for a year as he has been seconded to the University of Auckland to write the national program for STEM Online for Chemistry. Further responsibilities include being on the NZ Ministry of Education Subject Expert Group for Chemistry for the review of the national qualifications framework and he will also sit on the panel Maori and Pasifika education.

Married to Meredith and with three young children, Emily, Merryn and Kellan, Kane is kept busy with his Lasallian commitments, school and home life, and as the Head Instructor of one of the largest Taekwon-Do schools in the country.

What is the LMC?

The Lasallian Mission Council (LMC) was established by a resolution of the 2012 Australia, New Zealand, Pakistan and Papua New Guinea District Chapter, to have mission-focussed responsibilities throughout the District with a Board comprising at least 50% lay partners.

The establishment of the Lasallian Mission Council is intended to strengthen the association between the Brothers and those engaged with them in their mission, ensuring that there is real co-responsibility in decision-making as they work towards the integration of various Lasallian works.  The ultimate goal is to ensure the sustainability of the Lasallian mission so that the needs of the young, especially the poor, marginalised and vulnerable in our society, can continue to be met.

Lasallian Mission Council has a clear focus on ensuring, through Lasallian Mission Services, that the Lasallian mission is supported and sustained as effectively as possible by the delivery of the best possible formation programs. Such programs are currently focused on students and staff, with plans to expand to include the Boards of Colleges and our other works, yourtown and the Lasallian Foundation. We also hope to include parents and alumni in such opportunities in the future.

LMC Board Members include: