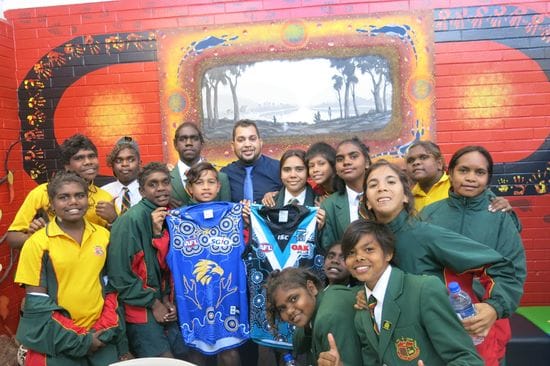 La Salle College Middle Swan's Aboriginal Teacher Assistant, and Western Australian Artist, Mr Kevin Bynder's artistic flair and design have earned him the privilege of being selected as a designer for both the West Coast Eagles and Port Adelaide for the Indigenous Football Rounds. Kevin, a Whadjuk-Yuet-Balaadong man from his mother's side and a Badamia Yamatji from his father, has been an artist for 17 years and already had a previous design chosen in 2016 for the Western Australia's Men's and Women's State Aboriginal teams, National Indigenous Cricket Championships.

The 2018 AFL Sir Douglas Nicholls Indigenous Round Guernsey's, were designed in conjunction with the club's unique culture and history. Even more special for Kevin is the design collaboration with his nephew, Port Adelaide Football Club ruckman, Paddy Ryder.

Kevin's artwork was also displayed throughout the games on the large screens.

The 10 circle around the edge of the jumper represents the 10 listed Indigenous players that come from all over the country to fulfill their AFL dream. The pathways you see leading from their circle to the middle is their personal pathways to the club. The middle circle represents the Port Adelaide Football Club, the 11 figures around the circle are the 10 Aboriginal players teaching the coach Ken Hinkley about culture. The circles near the V are the campfires of the ancestors from Port Adelaide and their above everyone else looking down and protecting the players spiritually. The water at the bottom represents the ocean around the Port Adelaide area. The circles on the top part of the jumper represents all the supports, players, up and coming members both deceased and current. The little yellow spikes on the jumper represents human footprints. The logo as white pale markings in it, that's what Aboriginal people use to paint themselves with before war and cooroboree (Dancing). Just like an Eagle going for prey, the Talons represent the fierceness of the Eagle, like when the players attack their enemy. The bottom shows the old area of the Derbal Yirrigan (Swan River). The 6 circles represent the 6 Whadjuk tribes along the river, Whadjuk is the tribe of my Grandfather and the Whadjuk area is from Fremantle to Moore River.

I'm a 43yr old Whadjuk-Yuet-Balaadong Nyungar with a Badimia Yamatji Father. I have 3 beautiful children and 2 step children, raised in the Northern suburbs of Girrawheen.  I left school during Year 11 and had several small jobs before joining the Police Force in 1998 in Halls Creek and Fitzroy Crossing. It was there that I was discovered for my passion for artwork. My first selling piece was $50.  Initially, I thought it was a hobby that I could pursue. Moving to Broome I was lucky enough to have a studio at Gecko Gallery which I would use part-time to create. Moving to Perth I kept painting, even having children and working away didn't keep me from my passion. 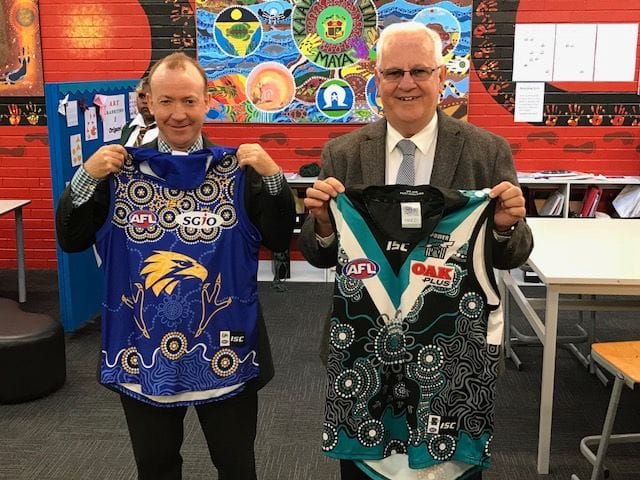 In 2014 life changed and I suffered very bad depression, anxiety and PTSD. After a 2-year period with the help of family and friends, I picked up the paintbrushes and since created huge pieces of artwork for several worldwide companies. Working at La Salle College has given me the opportunity to help young Aboriginal students in culture and art as well as pastoral care.

For the full story on the design, please visit the West Coast Eagles and Port Adelaide websites below.