Posted by Jordan Grantham on 26 November 2018 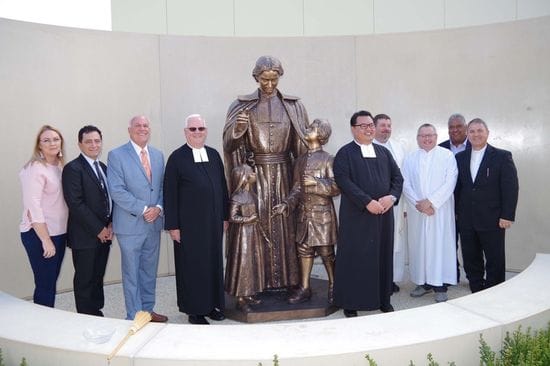 La Salle College, Middle Swan hosted Australia's first event to celebrate the Tercentenary of the death of St John Baptist de La Salle on Sunday 25 November, the Feast of Christ the King and the end of the previous liturgical year.

The Tercentenary is a worldwide and year long celebration of the inspiration and legacy of the Patron Saint of Teachers and is also designated as the Year of Lasallian Vocations.

The theme for the year is "One Heart, One Commitment, One Life."

A new statue of the Founder was unveiled by Br David Hawke FSC, Provincial of the De La Salle Brothers and Mr Joe Marino, College Chair.

The College Choir, under the direction of Ms Masmanian, beautifully sang the College song, Deo Duce and Walk in the Light.

Despite threatening clouds, the weather held out and the occasion was joyous, with audible gasps of wonder as the statue was unveiled.

Principal Wayne Bull commissioned the statue earlier in the year, which was shipped internationally.

The statue's position is historically significant as the location of the original statue from 1954, which was restored and set in the memorial garden adjoining the College Chapel.

After the unveiling and blessing of the new statue, guests were invited to afternoon tea in the Patricia Rodrigues Centre to farewell Mr Wayne Bull as he concludes his tenure at the College.

Mr Joe Marino, Board Chair presented to Wayne, on behalf of the Board, a painting by former La Salle student, Chris Arnold, especially commissioned for the occasion, of Wayne and his late wife, Margaret, who passed away at the beginning of the year.