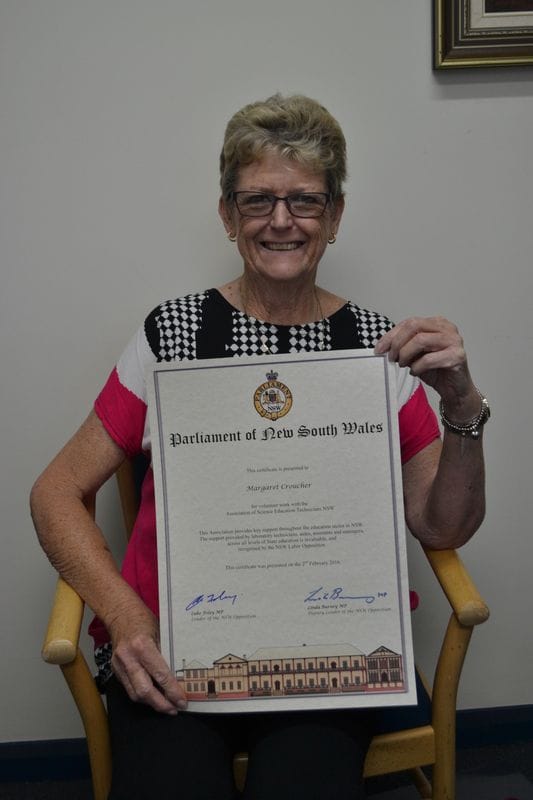 La Salle College Bankstown staff member Margaret Croucher has received a Parliament of NSW Award in recognition of her volunteer work over recent decades in helping to set up a state professional association for science education technicians in NSW.

Margaret has an inspiring passion for science education, having worked as a lab technician across seven different schools since 1988.

This includes 16 years in Catholic schools in western Sydney, including ten years at La Salle Bankstown and earlier stints at St Patrick's College Strathfield and Good Samaritan College in Hinchinbrook.

Over the past 14 years, Margaret has worked alongside fellow lab technicians in schools to set up ASETNSW Inc, a professional association to support colleagues from all education sectors.

"I've seen through the years how lab technicians make a big difference in the classroom, but unfortunately they don't tend to receive anywhere near the same praise or recognition as science teachers do", Margaret explains.

"So it's great to see the work we've been doing through our committee finally recognised through an award like this".

Margaret says it is critical now more than ever to encourage students to pursue careers in science.

"Unfortunately we've got a real shortage of qualified science teachers and so we need to work harder to ensure the science curriculum is interesting and engaging, so that male and female students can be encouraged to take science subjects in their senior secondary years and through to the tertiary level as well", she says.

As La Salle College Bankstown moves towards being a fully coeducational school, Margaret says she is particularly looking forward to encouraging more girls to consider careers in science and engineering where they have tended to be greatly outnumbered by boys.

"The girls need strong mentors in science and I hope I can play some role in that at the school", she adds.