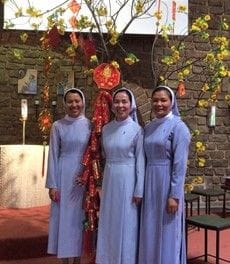 Three religious sisters, unknown to many Lasallians, live, work and study in multicultural Bankstown, N.S.W. They are establishing themselves, in their community house, and ministering to young children in a functioning Child Care Centre. The La Salle Sisters Theresa, Anna and Theresa- are members of a Sai Gon, Vietnam Congregation, more than fifty years old. It is an expression of the Lasallian charism (Spirit-gift to the Church).

The brave move to Australia happened over ten years ago. The Sisters are somewhat global too, having missions in Bangkok, San Jose California, Houston Texas and Cambodia. In their home country there are 150 plus Sisters working mainly in early childhood education. Their focus has been, similar to the De La Salle Brothers, who started schools for the marginalised youth of France. One core concern in Vietnam is the education of ethnic and poor minority children, who are quite numerous, who have little schooling or who drop out from attending.

Coming to Australia posed several difficulties. A key one was learning English, and then getting professional qualifications in order to run pre-school or child care centres. Then there was finding suitable employment, as they did not have their own functioning centre. And of course, there was the need for permanent residency visas. The Brothers have given strong financial support, to the stage where the Sisters now earn wages.

Staying the course so far has seen the Sisters gaining recognition as an Australian-working religious congregation. In March 2021, a successful hurdle was passed: they are now an incorporated 'association' which can own property etc. A happy endpoint will be achieving registration as a 'Charity' with the Australian Not-for-Profit and Charities Commission in the near future.