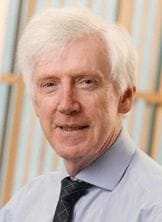 As a young student on a scholarship at De La Salle College Malvern in the late 1950s, Michael Coughlan never dreamed that one day he would go on to work at the senior levels of the United Nations in Geneva, shaping the direction of global climate change policy.

"I wasn't a brilliant student by any means at school, but I had a keen interest in science that was nurtured during my years at Malvern", Michael explains.

"I had some wonderful mentors particularly Br Gerard Rummery and while there was a strong sense of discipline, I had very fond memories across the different sporting and cultural activities I was involved in".

Michael was a keen sprinter and high jumper in the school athletics team, a ruckman in the First XVIII football team and a bass singer in college choirs.

He matriculated in 1961 as House Captain of St Austin's and maintained his connection to De La Salle Malvern, playing with the Old Collegians football team.

It was his fascination with science that led Michael to undertake a cadetship as a trainee weather forecaster at the Australian Bureau of Meteorology, before working as an aviation and public weather forecaster in Darwin and Perth.

His insights greatly impressed climate experts around the world and Michael was asked to work on global programs in Washington DC and Hamburg in the early 1990s, prior to joining the United Nations affiliated World Meteorological Organisation in 1997.

Based at the WMO's headquarters in Geneva, Michael took on the key role of Director of the World Climate Change Department, representing the organisation at several international forums on climate, including Conferences of the Parties to the United Nations Framework Convention on Climate Change.

He returned to Australia in 2003 to head up the National Climate Centre, overseeing the expansion of Australia's aid programs to improve climate services throughout the South West Pacific.

It is through this work that Michael says he drew heavily upon the Lasallian commitment to social justice that was instilled in him during his years at De La Salle Malvern.

"I travelled to a country like Samoa for example which has been particularly hard hit by climate change and yet it lacked any effective technology to monitor changes in the climate", he explains.

"So I was determined to see that addressed by improving their computer systems to help them prepare ahead both in the short term for extreme weather events like tropical cyclones and in the longer term for climate changes that will fundamentally impact upon their food and water resources and their fishing industry which they rely upon to survive".